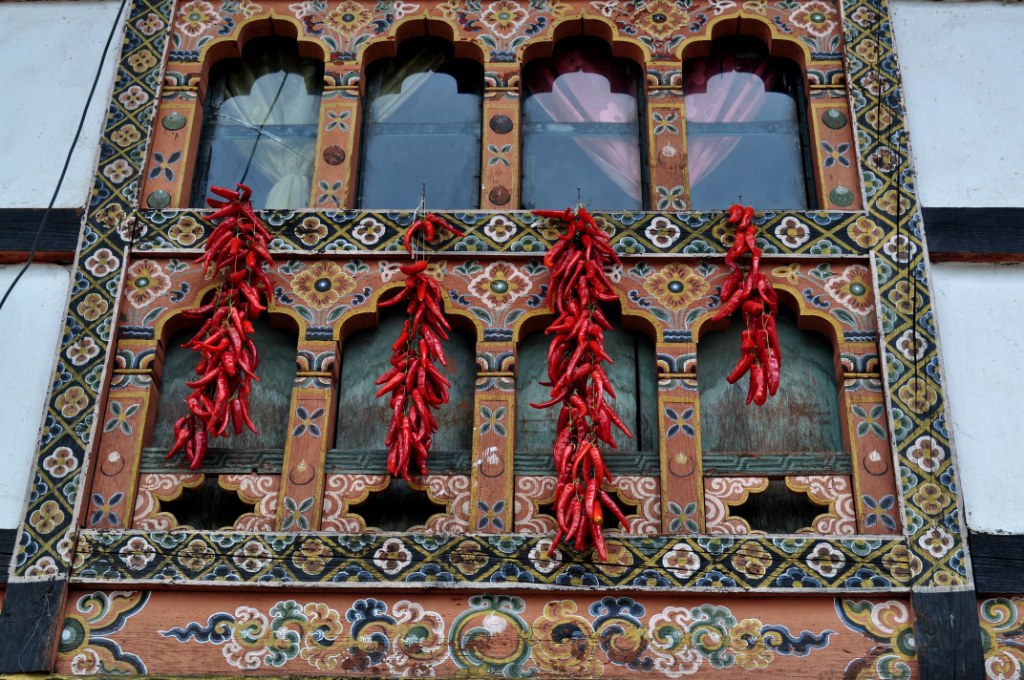 I shouldn’t have been crying, not on a holiday that had been turning out to be wondrous, but the tears flowed unabated without apparent context or reason. Yet, seconds earlier I had been giggling over an abominably exaggerated sketch of a phallus — imagery that had repeatedly piqued my curiosity — on the wall of a wayside Bhutanese hut.

I had fallen in love with Bhutan the moment we had wheeled into the border town of Phuentsholing from India. Compared to my bustling, swarming homeland, this David, squished between the Goliaths of India and China, had felt like a different planet. It had a tranquil and contemplative air about it, capable of imperceptibly lulling one into a meditative state. As we had driven farther in after clearing immigration, everything about Bhutan confirmed its subliminal reputation as the last Shangri-La. The burnished faces and unaffected simplicity of its people; the tapestry of red chilies drying on the rooftops of houses of slate, timber, and rocks with colourful frescoes and overhanging eaves; the undefiled streams, centuries-old vibrant wooden bridges and tidy roads sans traffic signals; the women in their kiras (the traditional gown); the Zen-like quality that infuses the air and the vestigial culture and tradition resonate with the truth in this diminutive country’s tourism slogan: Happiness is a place.

Why, then, was I crying in this abundantly happy place?

The sun had set, imparting twilight’s diaphanous veneer of pink to the landscape. My husband and I had trekked to Cheri Goemba, a 17th-century Buddhist monastery sitting atop a hill north of capital Thimphu, and were ambling back hypnotised by the transcendental beauty of earth, sky, wind and water. Far into the horizon, blobs of green — smudged, it seemed, to form amorphous batik patterns — spread seamlessly, occasionally revealing themselves as rhododendron or oak or pine. Wisps of clouds were gliding in the sky as if in a hurry to get home before dark. Up ahead a brook roared deliriously as it heaved past arched rocks and dived into seeming obscurity under an ancient covered bridge of wood and stones. We had to cross this vibrantly painted bridge, its kaleidoscopic beauty enhanced by string upon string of Buddhist prayer flags — blue, white, red, green, yellow — clinging to the rafters, railings and arches. There didn’t seem to be anyone else around except a few ponies, sanguinely grazing at the fecund foliage. Dodena, the hamlet we were in, was nothing extraordinary but it made up with the sublime.

As we crossed the bridge, the evening breeze tenderly tousled my short hair. Spritz of the gushing river water sprayed my face. The intermittent flapping of the prayer flags, the benign gush of water, the call of an odd thrush or raven, and the rhythmic clank of a giant prayer wheel just beyond the bridge — potent sounds of silence — worked like salve. I felt a calmness I had not known. This milieu of ethereal beauty, tranquil and devoid of artifice, tugged at my heartstrings. I stopped and clutched at the railing.

And then, just like that, the tears started pouring out, relentless and soundless.

The quiet had pierced something deep inside. The moment of catharsis had found me. I was purging myself of diffidence, negativity and hopelessness. “Dharma (the Buddha’s teachings) is the only truth; all else is chimera,” the wise words of the teenaged monk we had met while trekking up to Tango monastery near Thimphu only a day earlier echoed repeatedly. Aided by the divinity of the monastery we had just visited and propelled by the blithe spirits of the magical twilight hour in the surreal setting, I had an epiphany: In this huge magnificent world I was nothing but a tiny inconsequential speck. The realisation, far from weakening me, was empowering as all my rants and troubles, conflicts and deprivations, challenges and shortcomings, grief and ecstasy, appeared the way they actually were, trivial and delusional. Just a chimera. It dawned on me that there could never be a problem I wouldn’t be able to surmount, if I kept the faith. For, hadn’t my heartaches steeled me? Didn’t my failures improve me? Hadn’t I become resilient because of adversities? I suddenly felt in control of my life. I felt… strangely, brave.

And there, at the base of a hill just off Thimphu where I was a visiting foreigner, I dropped anchor. Whenever besieged by problems, real or perceived, I close my eyes and revisit it. Frozen in my mind’s display window, it works both as succour and reassurance. Now what can be more beautiful than a place that unfailingly gives you hope and a renewed joy in living? The relentless Ibn Batuta had said: “Travelling…it gives you a home in a thousand strange places.”

Dodena is my home. I left it knowing I had arrived.

Read other article by Shilpa Gupta