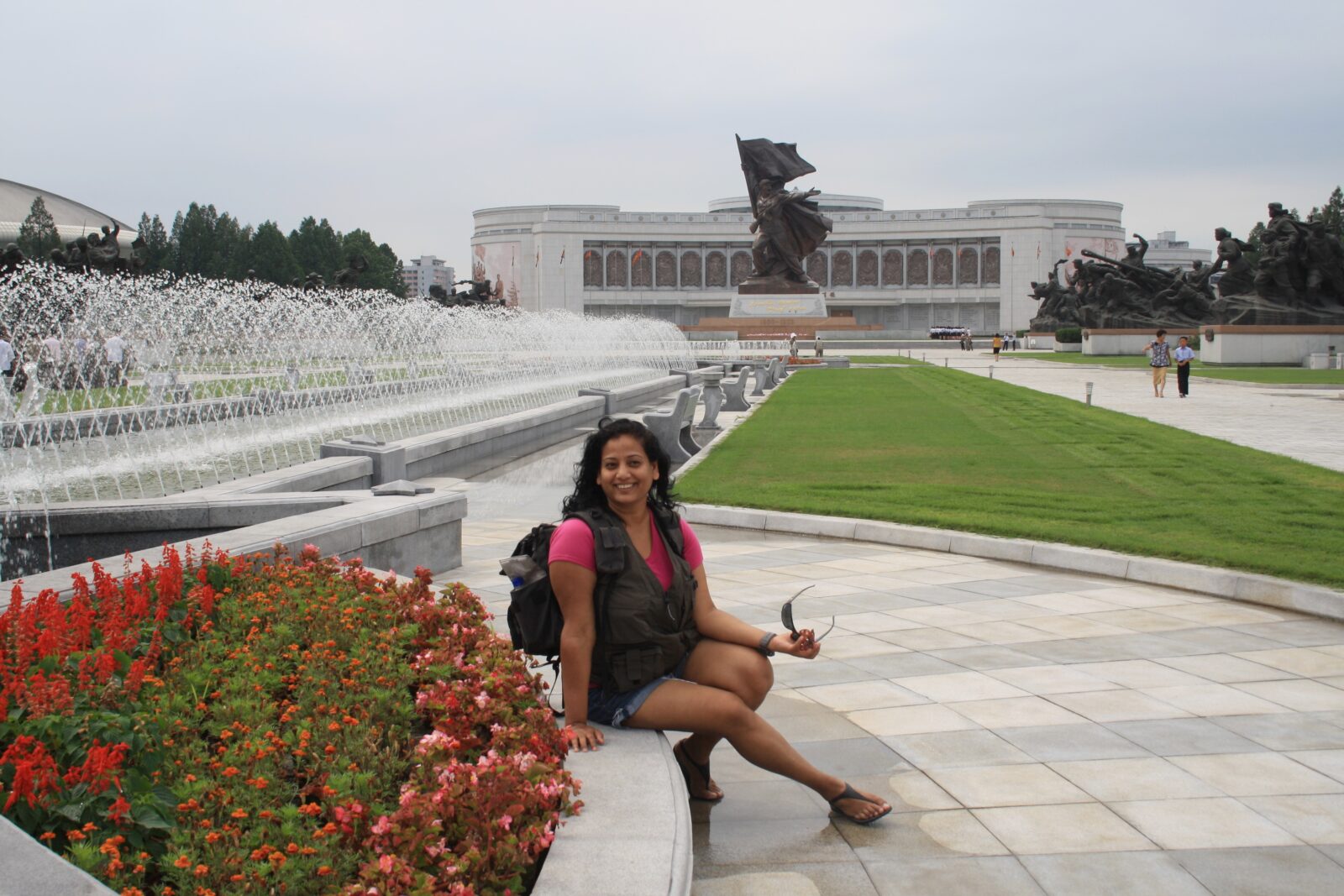 It was getting dark as yet another exciting day in Democratic People’s Republic of Korea (DPRK or North Korea) came to a close. Fortunate to be a part of the group of sixty tourists who had been given permission to visit one of the world’s most intriguing countries, I had seen everything that had been “decided for me” to see in the last three days. This trip was proving difficult for me as a traveller, even more so as a solo Asian woman who celebrates freedom through travel, but I bit the regimented North Korean bullet and assured myself I was right in coming here.

A legend of love
Pyongyang was covered in darkness as we sped towards the hotel. Ms. Deer (name changed), the head-guide, was slim and beautiful, spoke very good English, knew her Korean history and was remarkably patient. When she spoke on the mike, we learnt that she could sing too. That mike gave her a voice. The bus raced towards the Yanggakdo Hotel. Built on Yanggak Island on the Taedong river, it’s the country’s most prestigious hotel and our group was made to feel lucky to have been upgraded to stay in it.

“You can even make calls from there,” Ms Deer told us pleasantly before picking up the mike. “I will tell you about our famous folk song. Once upon a time, a young couple who lived on a high mountain pass was forced to separate. As the man took off, the bride leaned over the window and watched him till he disappeared into the forest. She sighed so deeply that the valley echoed her pain. That is how the song was born. It is a song of love and hope, and desperation.” And she started to sing in her soft and melodious voice:
“Aarirang, aarirang, arariyo
Aarirang gogaero neomeoganda…”

When she stopped, there was complete silence as everyone tried to process what they’d just heard. Even to my untrained ears, this was priceless and rare. Confused by the silence, she laughed and said, “I will sing you an English song. Who likes Danny Boy?”
That’s when a round of applause went around. In her choice of song, she had expressed her real feelings of longing like Aarirang.

Something the regime had been unable to break.
I had the good sense to record the song. In case you are wondering how – well, you could take in a mobile phone, though you couldn’t use it (wifi is unheard of and you can’t buy a local sim card). In North Korea, a phone is as good as your bar of soap.
When I turned in for the night after the excellent dinner, I recalled the day’s highlights. And Ms Deer – she was in my thoughts all the time.

A belief that transcends reality
In the morning, we toured the Mangyongdae Native House where eternal President Kim Il Sung was born. The surprisingly well-kept humble thatched house, the almost new pots and pans that hung on the walls, the “tub” in which he bathed as a child – everything had a sense of unrealism. When Ms Deer told us about the Miracle Well, I could swear she was looking at me. Perhaps, it was because she could connect with my culture more easily since Asian beliefs are replete with miracle waters and stones.
She lingered by my side, happy to answer questions about magical waters, silently urging me to drink it. While the magical well’s history glorifies the country’s rulers, outsiders are allowed to drink from it too as a celebration of a long life.
She led us towards the well and with a sharp tug, drew up a small bucket of water. Picking up a half cup, she put it to her lips. Her eyes closed in reverence, possibly imagining the water washing away her fatigue and advancing age to restore her vitality and youth. Her belief transformed her and a peaceful smile appeared on her face. Out of curiosity, I followed suit.
I didn’t believe in reversing age, but I was thirsty. I closed my eyes like Ms Deer and tried to imagine turning younger and ebullient. When the cold, clear sweet water touched my lips, it altered me at least in my own imagination. It reminded me of the holy water I had drunk from countless holy places around the world. I had never felt so cleansed and revitalised. I’m not sure if it was the water or Ms Deer’s faith, but my thirst vanished.
“Our Great Leaders have drunk from it for years. It is why they are always youthful and strong. It is why they are eternal.”
“Amen”, someone whispered. Not quite the most appropriate thing to say in DPRK considering religion is discouraged. If anything, Juche philosophy is encouraged.

A representation of DPRK
I had about enough of the “Korean War”; bowing to statues of Great Leaders; the constant allusions to Americans as Imperialists; propaganda posters; citizens with compulsory lapel pins; dictator-ish policewomen; the garishly modern Kumsusan Palace of the Sun, a desolate airport and the empty shell of the Ryugong Hotel…but I tried to see the brighter side.
There would be plenty of stories to tell for years to come. Like being able to stand on the demarcation line between North and South Korea at the DMZ and for an instant wishing to just cross the line. I particularly remember the tram ride and I’m certain the locals will never forget it too. While solo Indian women travellers to DPRK are a rarity, even more, rare are those who hang out of a tram (and live to get a picture of it) with the locals looking on, trying to hide their astonishment and smiles.
Considering the lack of access to the real world, people’s lives revolved around their country and its great rulers. The version of Korea they knew or were taught was unimaginably false. But since I was not visiting DPRK to double-check their claims, I accepted it all with a smile and bowed to every statue of their demigods and kept my smile on.
North Korea is a dictatorship of the most extreme kind. Closed off to the world, it is secretive, doesn’t believe in freedom and has a version of history that is hard to digest. But that is not what I am going to talk about.
We were told that everything is provided for in the country. Housing, food, education and medical assistance, et. all are state-sponsored. People are happy to work and get food coupons in return for their services. The food is distributed through a Public Distribution System that calculates the exact amount of rice to be given per family, while luxurious food items like noodles or pork are allowed a few times a year. Kimchi and rice are a staple and encouraged. No one complains.
Sadly, every meal we had was a celebration of what DPRK denies its citizens. Food was in plenty and the variety was mind-boggling for a country continually plagued by famine. What made it worse was that Ms Deer was never allowed to share the table with us.
The glass noodles, kimchi and barbeque were superb. So was the beer. Sometimes, all you need is beer and folklore to bind you to a place or to forget the atrocities inflicted upon fellow human beings as evidenced in the Korean War Museum. Beer was the only luxury that the locals enjoyed. Beer No 2 was particularly good and I hope it helped the locals forget, even if for just a moment, that they were free like us – the outsiders.

Memories of a golden voice
When I look back, there is never a moment when I think of DPRK and Ms Deer isn’t a part of that memory. She represents the country and what I want to remember a country by. Not the Arch of Triumph or Juche Tower or the grand monument of Mansudae Hill or its swanky underground stations – but by the hope in her voice. In the music of Aarirang is hope – a common thread shared by folklore around the world. A story that speaks of loss and hope, and of love.

Anjaly Thomas is a lawyer turned author and traveller and has travelled solo to over fifty countries, including North Korea. She is the author of four published books – Almost Intrepid, Lonely Planet Dubai, UAE Country Guide, There Are No Gods in North Korea. She is awaiting the release of her fifth book titled Plentiful Springs. She is currently based in Dubai and freelances for various newspapers and magazines while working on her sixth book. She is an avid reader and a TEDx speaker.