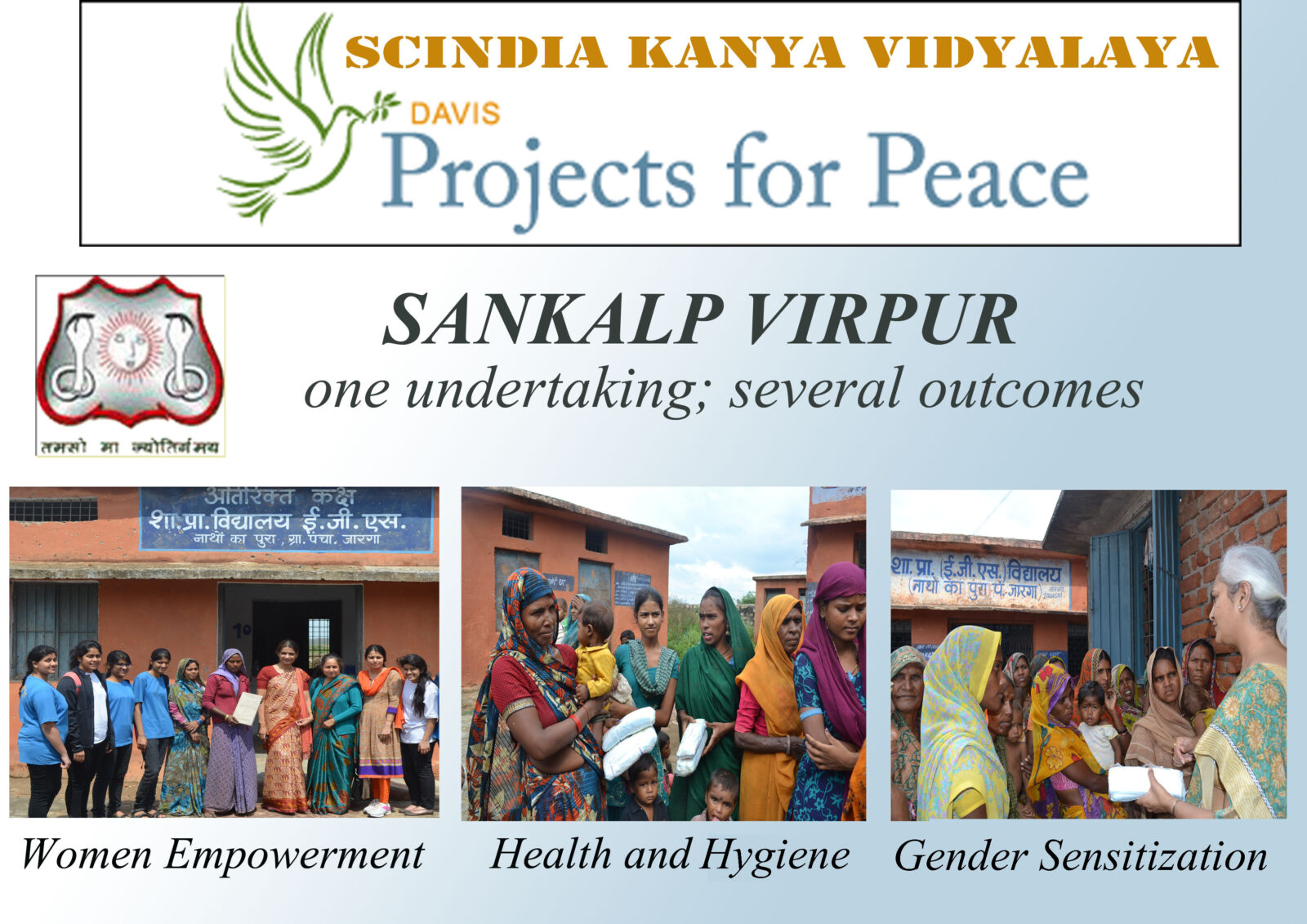 Mrs. Nishi Misra, Principal of my alma mater, Scindia Kanya Vidyalaya, Gwalior, sent me a video, casually mentioning it was one of the current projects the students were undertaking.

The six minutes spent watching ‘Why Should I Whisper?’ was a feel-good eye-opener. It made me truly proud to see how, through these young SKVians, Sankalp (literally, a pledge) had become a “livelihood mission for rural women”.

Started in 2012, Sankalp has since grown into a full-fledged enterprise with outreach to Jarga (25 km from Gwalior), and three other neighbouring villages. Additionally, SKV has been regularly stepping in to provide sanitary napkins to women affected by natural calamities. In 2014, Kashmir floods; 2015, Nepal earthquake; 2018, Kerala floods. During the current lockdown, 11,400 Sankalp sanitary napkins were given to the Dept. of Food & Civil Supplies, Gwalior, to support underprivileged women.

To reach where they are today, the students researched for over 15 months. Their survey showed that a large population of Gwalior lives in slums with no access to water and sanitation. Hygiene and cleanliness especially for women, was negligible and the lowest priority. The awareness and availability of products like sanitary napkins was absent.

A pioneer of Sankalp, Nishi Misra, speaks about the project’s initiation and commencement at SKV. “When our girls returned after their initial visit to Jarga, it was gratifying to see their enthusiasm. They were clearly determined to improve the hygiene of these rural women. Logically, with a sanitary pad. We installed an indigenous machine invented by Mr. A. Muruganantham, who initiated the low-cost sanitary napkin revolution in the country. The movie Padman, with Akshay Kumar in the titular role, was based on the innovator’s life.”

The Principal continues, “Initially, some students and teachers were trained to produce 600 low-cost bio-degradable sanitary pads. Since then there has been no looking back. Once our product was ready, the field work started at Jarga. A profit-making Business Model Summary was developed and implemented by our Commerce students to set up units in villages as an entrepreneurial venture. We put this into operation with a lot of fanfare, installing machines for the SKV Sankalp-Jarga initiative at the village centre. This has become our flagship village – our Karmabhoomi.”

Interspersed in the video are the life-transforming stories of some Jarga women. Despite initial hesitation, of perhaps stepping into the unknown, Rajkumari Devi reveals, “earlier we rewashed and reused rags, and eventually buried them. We then saw sanitary napkins for the first time. Now under the Sankalp project, we are making and selling them at Rs. 20 per packet of eight pads. We are transported to a new world. We stood up to walk. We will not halt now. We will create our own success story.”

Adds Urmila Devi, “Menstruation is God’s gift to us women, so why should we be ashamed of it? Every month “mahina to aana he hai (our period will come).”

Their passion is palpable. An example that brings this to light (pun unintended), was when these enthusiastic housewives would remove bulbs from their own homes at night to light up the manufacturing center to enable them to work till past midnight.

Encouraged by the success of Sankalp, and the extended Jarga family, one upgraded machine each was installed in SKV and at Jarga. These were Bhopal-based Rag Innovations’ semi-automatic Sanitary Napkin Making Machines, at a cost of Rs. 100,000. It is capable of producing up to 1,600 double die, low-cost ultra-thin, winged sanitary pads per eight-hour shift. This resulted in multiple improvements comprising compact sealing and an increase in production leading to enhanced selling capability.

Production assembly line involves the simple machines being laid out on eight stations – each the size of a student’s study desk. The process begins with tearing the raw cotton sheets and mixing them with binding cotton in a Mixer Jar. The material is weighed and 12 grams portioned into the moulds and compressed under an air-powered stamp. After inserting a water-proof strip, this initial napkin is sealed into absorbent tissue-cloth. An adhesive is applied and covered with a strip of oil-paper which can be stripped off to set the napkin in place. A maternity version with longer ‘tails’ is also being manufactured. At the end of the assembly line, the napkin is sterilised in a UV chamber. Sets of eight napkins are packed together in  cling film and are ready for distribution.

Under SKV’s Sponsorship Program, a market link has been established for these products. Further support is given to Jarga through purchasing their surplus packets and distributing these free of cost during SKV’s mission to make further inroads into another – and yet another – village.

Due to its highly affordable cost, enquiries are flooding in from hospitals, NGOs, and other women’s organisations for purchasing this product. This has set Nishi thinking of working out a small-scale industry model in order to make it a self-sustaining venture.

Recognition for Sankalp has come in the form of Nishi Misra receiving the Alexander Award from the Commonwealth Award for Science, Technology, Mathematics, and Education (CASTME), London (2014). The involvement of alumni, Aparajita Singh with Sankalp resulted in the Davis Projects for Peace Award, London (2015). The funding of US$10,000 received went towards setting up a similar unit in Virpur village which was functional by August 2015.

Nishi sums Sankalp’s premier enterprise as, “The income earned by the women at Jarga has seen an impressive growth not only in their confidence and self-esteem but also in them and their families, lifestyle – and further in their aspirations. This is really gratifying. If the mindsets can be changed, that’s half the battle won. Sankalp – or the resolution the students have made to reach out to the rural women, has become such a meaningful activity in the school. It will certainly have a far-reaching effect – affecting generations to come.”

And Sankalp’s journey continues through the initiative of the SKV students to help more women live with dignity and enhance gender sensitisation.

The Sankalp initiative spiraled me back to our days at SKV. We were the early batches. Some of us joined on a historic Day One – 1st August 1956, and others followed shortly after.

Upon seeing the Sankalp video Usha Raje (Scindia) Rana, Batch of 1959, commented, “This is a great initiative. Was so pleased and proud to see SKV girls inculcated with such good values and attending to their projects, like Sankalp, with such passion and interest.”

One of our founder-teachers, Sushama (Moghe) Varma, (1956–1965), who then 25 years old, joined a month earlier, on 1st July 1956. Now still an active, alert 89-year old, she says, “Was very glad to see this Sankalp project and proud of our school for taking this initiative. Going back 64 years, oh! yes, I vividly recall some of us teachers took the lead to tell the students about puberty and the onset of monthly periods. Nobody spoke to a gathering of girls, but as a house-mother, I was with the younger girls who would be growing up in my care, I talked it over with Sudha tai (Mrs. Sudha Tilak) who was in charge of our kitchen and was older and more experienced than me. She replied, “tell them casually, don’t make ‘an issue’ out of it.” Remember, it was an era when ‘The Period’ was mentioned in hushed whispers.

“Sometimes, while doing Dormitory rounds, I would speak to the girls, mostly in Sixth Class – possibly 10/12 years old. Told them about what ‘periods’ were and what they would experience when it happened. And there was no need to feel frightened or ashamed. Among them, Asha Gupta said, haan mujhe pata hai. Perhaps her mother had told her. Lata Jai seemed a bit confused and not very happy. Livleen was the easiest one about it all being a normal part of growing up. But all the girls accepted it. I think it was around 1960 we started getting Sirona sanitary pads in bulk. Another housemistress was in charge of them. Packets were given to the girls but charged to their accounts. In case of an emergency, a pad or two was given free to any girl or teacher.”

Over to Asha (Goel) Aggarwal, 1961 Batch, who even ‘manufactured’ the first pads before Sirona arrived. “Since 1958, we mainly Home Science students, Class 9 and above, would sit in the Dhobi Room and make sanitary pads from gauze and cotton wool for all the older hostel girls. I think I made these for almost three years. Helping us make these pads was that strong, hefty Leela bai who used to help carry our trunks upstairs. I would say Leela bai prepared us better for the onset of puberty than anyone else! During vacations, before going back to school, my mother took me to a shop in Connaught Place, perhaps Jainsons. They sold plastic lined panties for period days to prevent leakage. Nirmala Mukherjee didi, our sports teacher, insisted we continue playing during those days too. In fact, I performed much better during that time. Funny, naah?”, she remembers,

Livleen (Dhillon) Kalhon, 1962 Batch, laughingly recalls, “We would say things like ‘Sailing in a Red River’, referring to our period! We initially washed and reused cloth. Did not like this chore every month. We started using Sirona pads during our last two years in school.”

Bharati (Naik) Sukhatankar, 1962 Batch, says “We mostly used cloth strips, which were then washed and dried on the towel stands on the terrace.

Perhaps there is a link between the women SKV-Sankalp is introducing sanitary pads to – and the time when we were introduced to Sirona 60 years ago!