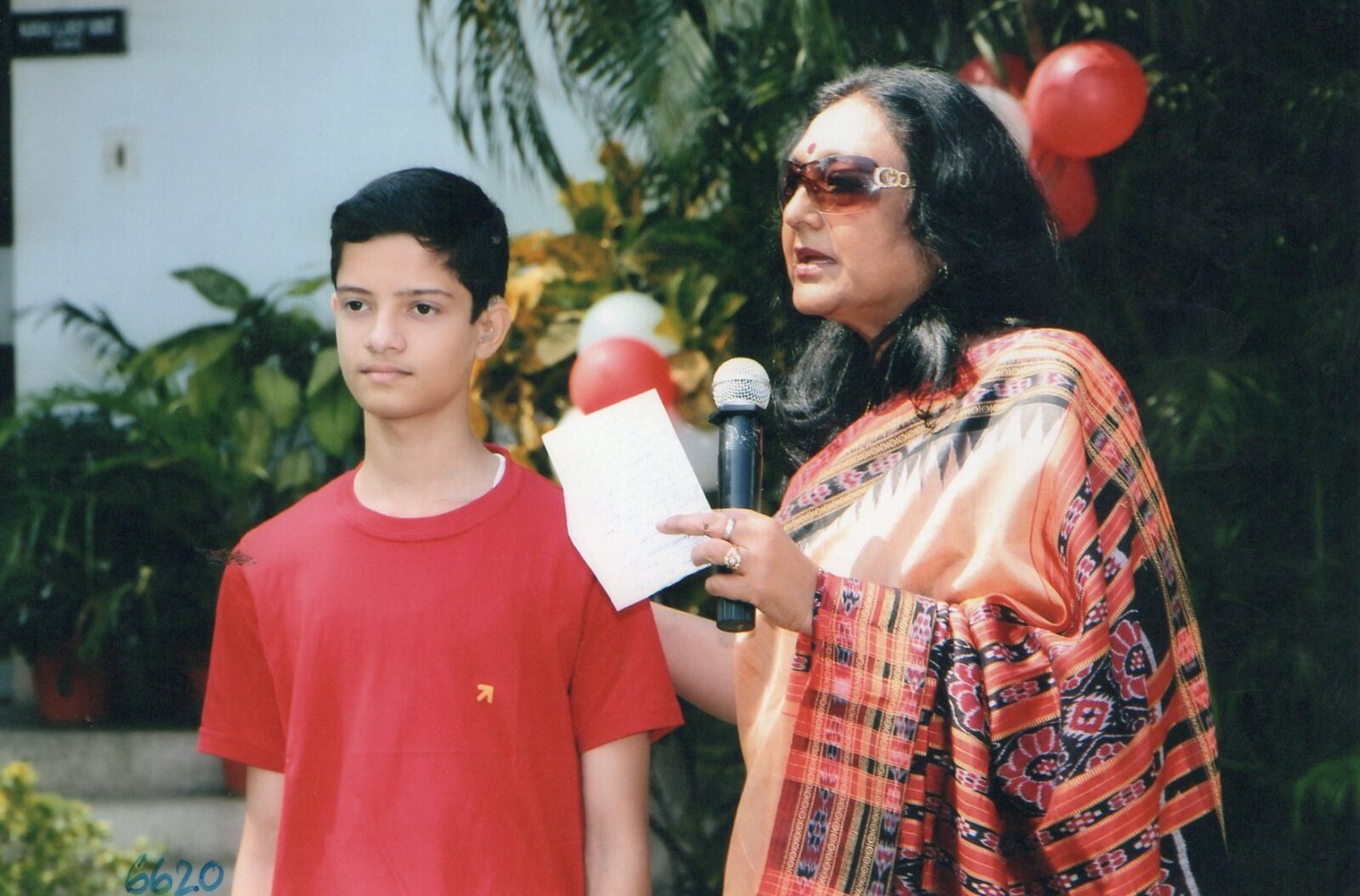 “By using the Auditory-Verbal Therapy (AVT) for the hearing impaired, which emphasis on ‘Listening’, we have till now enabled almost 200 children to grow up in a normal learning environment, become independent and participate in mainstream schools and society,” introduces Dipika Lall, Vice-Chairperson, Centre for Hearing Impaired Children (CHIC), Jamshedpur.

On a cold, sunny December morning, the almost 30 students of CHIC were dressed up and excitedly waiting for the guests to arrive. They were going to perform a multiple song and dance program for their audience. Besides AVT, the children participated in age-related activities, such as sports, dance, drama, skits, art and craft, etc.

This was an important occasion. The XLRI Alumni of 1971 which was Dipika Lall’s batch, were in town for their 50th reunion. The Alumni had gifted CHIC vital equipment like the Brainstem Evoke Response Audiometer. CHIC, now is looking to upgrade equipment, such as Impedance, Oto Acoustic Emission, and Auditory State Steady Response.

On arrival the group was taken around the school premises. The first interaction was with Audiologist Sanjay Kumar Mishra in the well-equipped audiology unit with the new audiometer. Backed by 10 years’ experience, the Bachelor in Audiology & Speech Therapy demonstrated the initial critical checking which leads to prescribing appropriate hearing aids.

The Stage One teacher-to-student class with three-year old Gopal and his mother, is with therapist Neha Sharma. “This is where the AVT begins ‘Conditioning with the sound’ and individually provides speech therapy to develop normal speech + language.

Therapist Susmita Samanta who has been working with CHIC since 2000, was with her 2nd stage student. “I am teaching him to listen and convert sound to word. It starts with a word or two and then it is two-three words’ sentences. The children come to us before they are five years old. The earlier we start with them, the greater is the success rate. What I do here, more importantly, adds another feather in my cap of experience in a more innovative way,” she says.

The next, 3rd stage, has Shreya communicating through sentences with therapist Navomita Chakraborty. The girl comprehended what we asked her. “During this phase we deal with the student’s comprehension, speaking sentences, and preparedness for normal/ regular school integration. One of the activities for the young ones is learning rhymes and music through ‘Listening’. Each child’s success is a great personal challenge and achievement for us teachers,’ affirms Navomita.

This interaction between teacher and student at each stage lasts from four to six months depending upon factors, such as the child’s age, degree of hearing loss, and most important, the parent’s involvement. This is integral as parents have to be committed to be involved with the child for his/ her whole life – or at least till they are independently capable of being educated. These children then study in regular schools with teachers from CHIC interacting with the class teachers on a regular basis and monitoring their students’ progress.

Outside again, the performances by the children were delightful. Hearing them sing and dance in rhythm to the music, one couldn’t imagine that they were born with congenital hearing impairment. Kudos certainly go to the entire, devoted CHIC team – and the children’s parents.

To find out more about how CHIC started, Vice-Chairperson Dipika Lall tells about when, after her MBA from XLRI, she joined Mrs Meher Vakil in 1986. The aim of the founder of the Education Audiology Research Society (EARS) in Mumbai, was to start an Infant Centre of EARS in the Steel City.

The Infant Centre started with two little girls, Pooja and Dolly. Dipika’s first meeting with them was during three-year-old Pooja’s test in the Audiology Unit of the ENT department at Tata Main Hospital. “One signal was given and Pooja immediately looked up and smiled. Her parents ran up to Mrs. Vakil and exclaimed: “Our daughter can hear”.

Seeing the relief and joy on their faces Dipika felt she had found her vocation – to take up this challenge of bringing happiness in the lives of children with hearing disabilities.

“I told Mrs. Vakil, I was interested in making this my career choice. Of course, when the question of remuneration came up, she felt that she would not be able to compensate me according to my qualifications! My parents had taught me to “give back to society whatever you have gained”. I told her my remuneration would be making these children hear and speak. Mrs. Vakil agreed, smilingly – and our journey began,” recalls Dipika, almost 35 years later.

As word spread about the availability of this facility, the number of children with hearing problems contacting them increased. In 1990 the Infant Centre got its Managing Committee and Dipika was appointed Vice-Chairperson. Tata Steel provided a separate building and also assisted in setting up testing labs, classrooms and provided seed money.

In 1997 the therapeutic center was formally renamed, Centre for Hearing Impaired Children with Hindi and English continuing as their mediums of instruction. As CHIC was the only facility in and around Jamshedpur, newborns, infants and children started coming in. “We offered early intervention which helps in ‘Listening’, automatically leading to vocalising which is possible only with AVT,” details Dipika.

Besides being coached on the job by Mrs. Vakil, Dipika received special training from Brother Kelly S.J from Gabriel Institute of Hearing Impaired, Sydney, when he visited CHIC.

The AVT method of teaching has advantages over other lines of treatment. Its success rate in making children join the mainstream is well established. Other methods being used for children older than five-six years emphasise on communication through sign language, cues, speech, and gestures, etc. as they are too old to benefit from AVT.

“AVT is not a new method, but became popular as the only equipment required is a good quality hearing aid. In many cases where Cochlear Implant has been done, AVT becomes more effective,” Dipika explains.

For the Vice-Chairperson a working day involves overseeing the administration and primarily being involved in AVT training of therapists, counseling the parents, integrating children in normal schools, and subsequently regularly monitoring each child’s development at various stages.

The ‘mother’ in Dipika would be quite disturbed hearing the parents’ woes but she, along with her team work diligently to make each case a success. “My first moment of satisfaction was a couple of years after I took over – when a child uttered two words. Her mother was emotionally overwhelmed, tears of joy rolling down her cheeks and crying “We never thought our daughter would ever speak”. My tears too were of a deep sense of satisfaction at what I had witnessed. From two children, we grew to 4/6/10 and the number kept increasing to our 321 registered children; of these 187 children through the normal procedure of admission are in regular schools. However, we don’t work with more than 30 infants simultaneously, as each child needs independent training and attention,” she continues emotionally.

As most children are from low-income families, Tata Steel facilitates the basic infrastructure and paying an honorarium to the staff. For all other activities and replacement of equipment, CHIC depends on public donations.

While treatment for the children is free, they need to procure the audiologist’s recommended hearing aid which costs approximately Rs. 20,000 each or Rs. 40,000 for a pair. Fortunately, the cost of most equipment has been borne by well-wishers and philanthropists.

The primary, initial funding came from Mr. Jack Timken who visited CHIC in 1996 while in Jamshedpur. Timken Foundation of Canton’s generous donation enabled CHIC to procure additional equipment, resulting in a full-fledged audiology unit being set up in 1997.

Examples of fundraising within the family include Dipika and Dushyant’s daughter Gopika and her husband Siddharth Dev running United Way of Standard Chartered Bank Mumbai Marathon in 2011 and 2012 to raise funds for CHIC.

Dipika’s brothers, USA-based Ravi Akhoury and Dr. Ratindranath donated money in memory of their parents, Mr. and Mrs. Akhoury Jankinath, for the auditorium above the CHIC office. Hemant Lall, Dushyant’s brother, has been sponsoring costumes, props, and accessories required for the Annual Day since 2018.

An unforgettable encounter was when on a flight to Singapore, the gentleman sitting next to Dipika got talking. She told him about CHIC. He asked if she had time to meet his mother, who was interested in work for the disadvantaged in India. Dipika met the Singaporean lady and recalled, “She was an elegant, pleasant person and genuinely seemed interested in what I was doing. Two days later, she sent a handsome cheque to be used for CHIC. I was overwhelmed. We are still in touch, but she and her son like to remain anonymous about their generous donation. God bless them.”

“Like them, there are a lot of caring people who have reached out and helped CHIC in different ways. This is what makes me a total optimist. I know funding for our children will keep coming, as it has been for over three decades,” signs off the Vice-Chairperson positively.

25 thoughts on “Eliminating The Sound Of Silence”