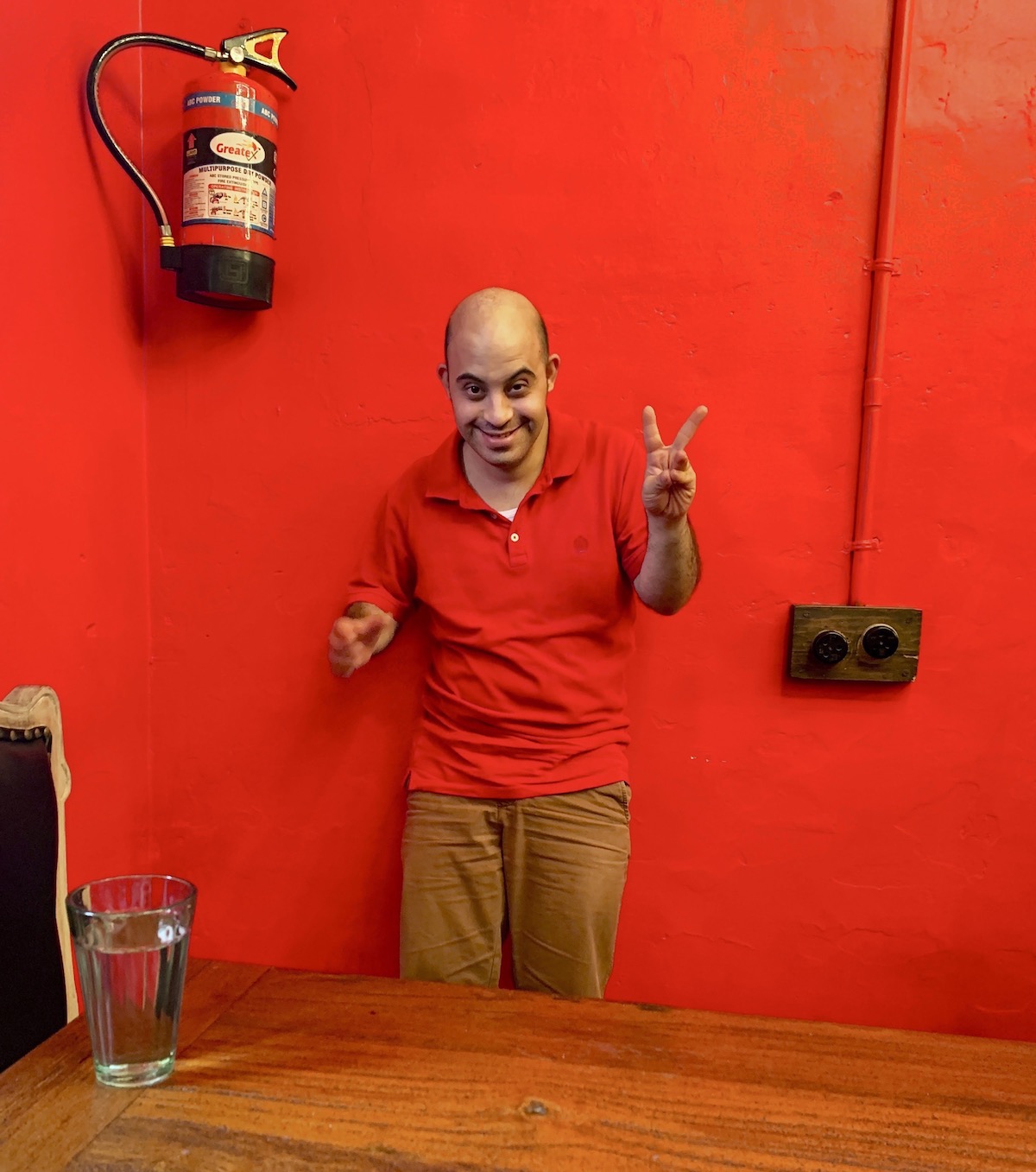 When he cycles around his residential gated community, Shaurya Mehrotra, despite his age, looks as eager as a teenager enjoying his outing.

Shift to his Banana Studio, also in Gurugram. In his self-named haven, the 32-year old potter and artist diligently concentrate on creating, exhibiting, and selling his signature artworks. He is often dressed in red, his favourite colour, and attired in jeans, a t-shirt, and a cap.

Go back to over three decades. Born in January 1988 in Lucknow, while recuperating in the hospital from neonatal jaundice, the baby boy contracted septicaemia. His critical condition necessitated oxygen and life-saving drugs. Almost six weeks later, the ‘miracle baby’ as termed by the hospital staff, showed signs of recovery. That’s when his Nani named him Shaurya, literally, the Brave One.

“When Shaurya was eight months old, while visiting my in-laws in Ranikhet, the family doctor broke the news to us that he was a Down’s Syndrome child. Anil and I were shaken, but our love and acceptance for our son ran too deep. In our eyes he was a special gift from God,” recollects his mother Nina.

Posted in Alwar, Rajasthan, the Mehrotras started visiting a series of doctors and specialists. To them, Down’s Syndrome was a vaguely known condition. A leading paediatrician in the capital painted a very bleak picture about Shaurya’s development and growth, saying he would be like a ‘vegetable’ all his life.

“We were traumatised, not knowing whom to turn to. Weekends were spent in Delhi for intensive intervention therapies for Shaurya. Simultaneously, homoeopathy helped build his immunity. For the first 10 years, he had frequent bouts of respiratory infections. His milestones were delayed. He started walking at two, while his speech was next to none,” continues Nina.

The parents, Nina and Anil, very stoically trained their son to master basic self-help skills like bathing, dressing, eating, and the critical toilet training. “His weak muscle tone and cognition challenges limited his movement and skills. He had major fears of loud sounds, darkness, animals, trees, machines – and doctors and hospitals. Therapy, over time, coupled with patience and space to recover has enabled him to overcome these phobias. Shaurya’s strengths continue to be his deep affection for his family, and his loving and expressive, child-like behaviour and the ability to overcome all challenges,” details Nina.

Due to Anil’s frequent postings, Shaurya adapted well to every new city they moved to. His fondness for music, dance and colours came to the fore in his early years. He enjoys being outdoors, and in the company of friends.

“We all walk to the beat of our own drum and so do our kids. Special kids reach their milestones at their own pace and one can only marvel at the level of independence they achieve in the face of challenging odds. Shaurya has a hero-like status in our family as he has overcome hurdles to reach where he is today. Most of his therapies – physio, occupational, vocational and speech were in his growing-up years,” states Anil.

While Shaurya attended special or integrated schools, his parents realised very early on that other than their functional use, academics were not for him. Building on his fondness for colours, Nina started him on making cards and bookmarks for family and friends.

Shaurya’s journey as a potter and artist began at 19 when the Mehrotras were posted in Port Elizabeth, South Africa in 2007. He joined pottery classes at the Lake Farm Centre for special needs. Under the guidance of professional potter Brenda Davis who later became Shaurya’s mentor, he created small handmade pieces. Three years later, when transferred to Bangkok, Shaurya trained under Khun Gaew at her Poteri hobby center. Shaurya’s happy spirit and willingness to learn culminated into “My Take” his first solo exhibition of 30 clay artworks at the Nelson Hayes Gallery in 2011. Since then, there has been no looking back for him.

Upon returning to India in 2013, the Mehrotras set-up a pottery and art studio for Shaurya in Gurugram’s Sector 49. The interior of the vibrantly colourful ‘Banana Studio’ was designed by architect and good friend Shradha Bhandari. Soon after, Anil’s job meant a move to Beijing for two years.

Since returning home again in 2016, Shaurya goes diligently to Banana Studio daily, accompanied by Nina. “Shaurya has blossomed here, making his and our dreams become reality. Since then he has showcased his pieces in Epicenter, participated in Finext 2017 in Indore, and also in Ceramic fest 2017, 2018 & 2019 at Sanskrit Kendra organised by Delhi Blue Pottery Trust. In 2018 he collaborated with 42 potters as part of ‘Woven Together’ initiated by eminent potter Ruby Jhunjhunwala in Jaipur, followed by the Ecapa exhibition in 2019. In February 2020, Banana Studio was invited by the India Art Fair2020 to conduct an inclusion workshop for special needs. Additionally, he keeps busy with crafting pieces during Rakhi, Ganesh Chaturthi, Diwali and Christmas.

“Simultaneously, in 2018, BBC WORLD did a video coverage on Shaurya the Potter and Banana Studio, adding a tall feather in his cap. Made us the proudest and happiest parents in the world,” recollects Nina.

The young man has since become quite a celebrity, being featured in various print and online media.

Cars are a passion – be it remote-control cars, which he enjoys charging and changing batteries of – and car racing on his play station. Drives with his Dad are special father-and-son bonding time. TV favourites are Tintin and Fast and the Furious series.

As advice to other parents in a similar position, Nina suggests, “It is very important to follow a daily schedule planned in the morning with our kids. It makes their day easy and predictable so they know what comes next. This helps them process information faster and most goals are met.”

Training to be independent in self-help skills may sometimes continue until adulthood due to several reasons. One has to balance between program goals and activities which allow a child to have ‘Me Time’ to do what he enjoys, sometimes perceived as a reward by the child, but mostly seen as a given.

“Do take them out for varied experiences. Social get-togethers, shopping in malls, eating out in restaurants, cinema, holidays and sporting events. Give them every opportunity to interact with the environment. This goes a long way in making them understand the world and improving their social skills,” the mother says.

“As our children look up to us as their role models, it’s natural we participate with them – while enforcing discipline about timings, hygiene, and social behaviours. This is a challenge for parents. Patience helps. A recent example was when Shaurya did not want to wear a mask outdoors during our afternoon walks. I explained that he can open his mask every five minutes to feel better, and then wear it again. He has got used to this without complaining. Showing others wearing masks, including photos of friends and family has helped,” describes Nina.

Shaurya loves Chinese cuisine, pizza and chocolate ice cream at restaurants and pubs. Dancing, which he learnt from the famed Shiamak Dawar, is a passion, and he invariably finds a dancing partner. In addition, online yoga keeps him fit.

“Delving deeper into his nature, he has the ability to recognise people who are genuinely interested in him, and forges deep bonds of love and caring with those who reach out to him. There is a sense of calmness and peace in his presence which is truly soul-lifting. Towards us, there is an acceptance and unconditional love of the purest kind. Most parents of special needs will relate to this,” adds Anil.

Signing off with these words, Anil concludes, “Beyond his evolution, this story will be incomplete if I don’t share how he has impacted us. Living and growing with Shaurya, Nina and I have realised that ‘LOVE’ is the single most powerful energy that can shape the world. Shaurya has taught us forbearance, tolerance, empathy and living in the present – above all, the sheer joy of being – backed by his sense of humour. As Shaurya’s parents, we feel blessed daily. Yes, we have come a long way with him, and we want him to be a part of our lives forever.”