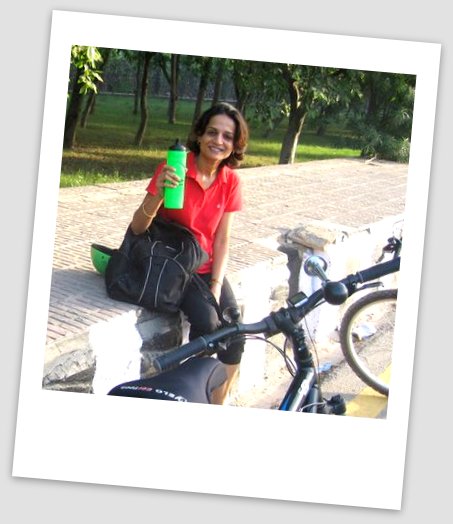 It all began some years ago when I started feeling terribly cooped up and stifled due to being perpetually indoors. Be it home, work or leisure, none seemed to facilitate getting me outdoors, at least not in the way that I defined it. I had tried going for walks but doing repeat loops of narrow, well-manicured walking paths in neighbourhood parks had made me feel like one of those laboratory rats that keep going around a maze as part of some experiment. The other popular option of going to the local gym was effectively excluded since the operative word for me was “out”doors. There was swimming, yes, but it was available for just about four months of the year. Plus, the chock-a-block full swimming pools in surreal shapes of kidneys and sun signs did not do much to inspire.

Then a brainwave hit me around my birthday, which is also the annual ‘check my bucketlist’ time of the year to see which boxes haven’t been ticked. I saw, ‘Bike’ written right under the heading of Things-I-loved-to-do-as-a-kid-and-want-to-do-again-because-I’m-not-dead-yet. It got me thinking. Cycling had been my favorite childhood sport and given the near claustrophobia I’d been feeling of late, it really was perfect timing. The decisive moment came at a friend’s house at dinner where I met a couple, both passionate cyclists, who had just returned from a Manali-Leh ride. I was completely bowled over hearing about the incredible experience it had been to ride in the mountains. Anju was really encouraging and told me I should go for it, and motivated me further by saying that if she could do it, then, so could I.

It was like the proverbial shot in the arm that gave me fresh impetus to put my deliberations into action. Of course, I didn’t take it to mean that I should climb onto the first available bicycle and ride off to the Himalayas. I reckoned that all I needed was to:

Step 1 took me to the local bike shop where the mind-boggling variety of bikes and their price tags had me reeling. Whoa! When had this happened? My last bike, which had been many moons ago, had been a snazzy green BSA with nifty brake cables and an affordable price tag. This was going to need extensive research I realised, so in the interim I decided to find out about the places where one could ride.

Step 2. Where on earth could anyone ride? The traffic on the roads was a killer even from the relatively safe confines of my car. It made being on a bike look like a wish to commit harakiri! This sobering thought was enough to make me pop the next question to the bikeshop assistant – where did the people who bought these cycles ride?

Voila, came Step 3 as I was given the contact details of a local cycling group. That same evening, I called the cycling group’s admin, who patiently addressed my queries and told me to come for a beginner’s ride where a guest bike would be provided to me.

The following Sunday morning I turned up at the designated meeting point, understandably apprehensive about being able to accomplish much after a hiatus of 15 years, and one look at the pro-cyclist appearance of the others did nothing to allay those apprehensions. There they were, resplendent in their padded, helmeted, and gloved best with a look that could burn the rubber on the roads. It set off alarm bells in me – what the hell was I thinking, I was going to get annihilated! My expression must have been a dead giveaway because suddenly I found the others rallying around, reassuring me that I’d be fine and they’d watch over me.

To cut the 17 long km story short, I managed to reach the finish point of my first ride. The legs were a little unsteady and the posterior somewhat numb as I got off the saddle, but I felt absolutely great. The follow-up ride that came three days later proved to be the defining point and I can’t thank Anuj and Arun enough for rooking me into believing that it was going to be an easy pace ride instead of the bone-shaker, teeth-rattler, bum-breaker 30 km off-roader! The confidence it gave me is what set me off on my cyclist avatar. I think Diane Ackerman’s words say it best, “When I go biking, I repeat a mantra of the day’s sensations: bright sun, blue sky, warm breeze, blue jay’s call, ice melting and so on. This helps me transcend the traffic, ignore the clamourings of work, leave all the mind theaters behind, and focus on nature instead. I still must abide by the rules of the road, of biking, of gravity. But I am mentally far away from civilisation. The world is breaking someone else’s heart.”

It’s taken me a while to write about my bike life, the thing that I pretty much eat, sleep and breathe. While 10/10/10 might seem like a date straight out of an ancient prophecy of doom, it happens to be the day I carpe diem-ed and went for the ride that changed my life. It’s no coincidence that today when I’ve finally gotten down to writing about it, the date reads 10/10/20, thus marking a full decade since D-Day. The how-to-buy-your-first-bike topic I’ll leave for another day, for now, I’ll just say that I bought my first bike, a beautiful Trek mountain bike, and there’s been no looking back ever since.