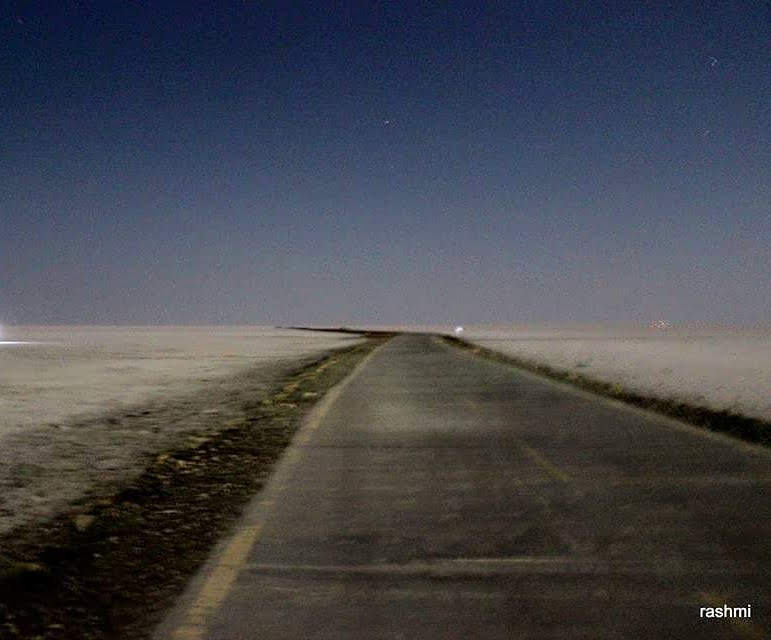 Imagine Diwali this year, you are walking on a great expanse of stark white salt plains laid out like a magical carpet spread far into the horizon, the mystical night sky is illuminated by a luminous moon and the earth is shimmering with diamonds wafting up from the ground. Is it a fantasy, a dream or a mirage? You can’t be sure as you walk on the white salt earth, the air aglow with seemingly billions of fireflies under the dark canopy of the constellations of effervescent stars. You would be forgiven for imagining you are the proverbial Alice in Wonderland, although your GPS will show Dhorodo in the Great Rann of Kutch, just 85 km from Bhuj in Gujrat.

The Rann of Kutch is one of the world’s largest seasonal salt marshes that stretches for about 30,000 square km in the Thar desert in Kutch, India and in Sindh, Pakistan. This area was once under the Arabian Sea till a geological uplift closed off the connection of the sea, leaving behind a vast lake which turns into a salt desert in the dry months and gets filled with water, standing at an average 15 m above sea level, in the monsoon months.

As a salt encrusted desert, the White Rann makes a crackling sound when you walk on it but is wet to the touch when you feel it. Simply put – it is hard salt and soft mud. And the best place to experience its mystique is at the Rann Utsav in Dhorodo. Started in 2009, the festival is held from November to March every year at a makeshift site where a tent city is created expressly for this period.

The locals believe that the Rann changes its moods with the changing hour of the day. In bright daylight it looks like a white desert, transforming into an orange crimson vista as the sun sets over its salty horizon. On full moon nights, it is at its resplendent best as it unfolds into a soft blue shimmery vision. I know because I was there and no amount of pictures can prepare you for the real thing. The only way to truly understand it is by being there.

I arrived at the Bhuj Airport on the eve of a full moon night, a little surprised to see the small and quaint airport teeming with people. Ok, so the baritone of Amitabh Bachchan was working, I thought, as I saw his picture on the billboard proclaiming “Rann nahi dekha toh kuch nahi dekha”. I got into the cab headed for Dhorodo and started making small talk with the driver, something I always do to understand the people and their land as the miles went by on a straight road cutting through the dusk of Kutch.

On arrival, the cab stopped at the entrance of the Tent City from where the battery operated cart whisked me into the Reception and onto my place of stay, a beautifully done up Swiss tent. I quickly got ready to leave for the White Rann as 8.30 pm was the start of the viewing of the full moon. We were driven about two kilometres away to the BSF check post, where we got off the vehicles and walked onto a road made like a promenade on the White Rann.

The night sky was lit up by the enormous orb glowing fiercely in the sky as I started walking on the kilometre long tarmac flanked by the White Rann. It was about 10 minutes before the full impact of my surroundings hit me. Was I imagining it? I wondered as I got off the tarmac strip and started walking onto the salty earth. It was like walking on a sea of shimmering diamonds wafting above the White Rann as far as my eyes could see. There was no sense of distance or space or time as I felt suspended in the timelessness of this stark land. The sense of peace was all encompassing and all pervasive as it soaked into the very depths of my being.

I have no recollection how long I was there or how far my mind wandered off, but at some point I turned around to where the vehicles were lined up to head back. The tent city was twinkling with inviting lights and the strains of folk music in the Kachhi night. It was back to life and living as the many charms of the mystical land waited to be discovered on an unforgettable Diwali on the White Rann.

As I remembered a fragment of a William Wordsworth poem, “The silence that is in the starry sky,” I understood the moment I was living. This was my Bodhi tree and it would stay with me for the rest of my life.

32 thoughts on “Diwali On The White Rann”