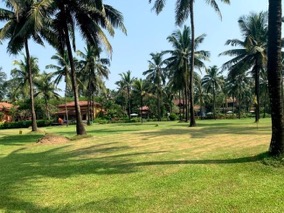 Yes, we had the deadly ‘C’ disease and I call it a ‘spa-like’ experience. Now, before you declare that the virus has affected whatever vestiges of the brain I have left, let me explain! After having battled the deadly virus, I was left with very mixed emotions. Top of the list was gratitude that both my husband and I got out of it without any major complications, but it also left a bitter aftertaste. The feeling of ‘not being fully well’ doesn’t go for a long, long time and varying degrees of weaknesses grip you every now and then. Added to it is the memory of the days of isolation that have given me a whole new insight into why solitary confinement is such an effective punishment. Not that I was really solitary as I had my husband along, and after 25 years of marriage, ‘solitary together’ is actually a form of companionship. On a more serious note, the emotional impact of being in isolation, especially when you are physically at your lowest, hits hard. So, saying that this virus takes a physical as well as mental toll is not an exaggeration. A well-deserved form of sympathy maybe, but definitely not an exaggeration.

Since we had been handed down lemons from the universe, we decided to have them with Gin and tonic. With immunity against the virus for two months under our belt (debatable I know), we decided to make the most of it and go on a vacation for a complete mind and body rejuvenating experience. The place had to be remote and beautiful enough to fill up the senses with freshness and life, and yet not too remote as solitary togetherness does have its limitations!

If you ask an Indian for a place that fits this bill, the answer will invariably be Goa. So, we headed to its magnificent beaches and intoxicating sea-breeze. Though the journey turned out to be like an experience out of a sci-fi movie, everything faded into insignificance the moment we saw the palm-lined vistas. The unending stretches of greenery melting into the magnificent expanse of the ocean were the much-needed balm for our extremely frazzled and weary senses.

We were staying on the beachside and the roar of the crashing waves along with the pleasant rustling of the trees was music to our worn-out nerves. The sight of the vast ocean, at times furious and turbulent, at other times crawling to the shore with low, rumbling sounds was all the elixir that our souls needed. Just being there, breathing in the moisture-laden, heavy yet pure air, aided deep relaxation. Of course, the company of fellow-humans helped in wiping out the isolation misery. I guess, being with nature made our pains dissolve as if everything else was too trivial compared to the limitlessness in front of us.

The dawn and the dusk seemed to be from God’s special palette. At sunset, one could see all the shades of grey and crimson competing with streaks of bright yellow, slowly swallowing up a big ball of orange, the mirror image reflected in the water below almost as if God herself found it too beautiful to let it be a single image.

At sunrise, the same ball of orange adorned more fiery shades of yellow and peeped out of the ocean at the horizon, slowly announcing its arrival while coaxing humanity out of the dramatic play of colours of the night.

Though we didn’t venture out much due to the Covid situation, the two must-do forts of Goa – Fort Corjeum and Fort Aguada were too hard to resist. The small Corjuem Fort, built-in 1550 by the Bhonsle rulers of Sawantwadi makes a statement with it’s solid and commanding look. Annexed to the Portuguese administration of Goa, it was rebuilt in 1705 to boost the Portuguese defense in Panaji. The fort commands a vantage position on top of a hill and is surrounded by the picturesque Goan countryside on all sides.

Fort Aguada is definitely one of the most magnificent and impregnable forts in Goa. It provides a majestic view of the confluence of the Arabian Sea with the Mandovi river and was one of the strategic watchpoints of the Portuguese. A monument to Portuguese engineering, it took over three years to build (1609 -1612) and at one time defended the Portuguese stronghold against the Maratha and Dutch invaders. It’s easy to get lost in history amidst the grandeur and the sheer size of this fort. Looking out at the horizon, I could imagine vessels streaming in with the fort signaling either a safe haven or a formidable opponent. Maybe it was the rich history or just the heavy salt-laden breeze, but my body seemed to revel and come alive, relishing the feel of coarse sand and salty water in the breeze.

The legendary Goan cuisine and just the right level of revelry proved to be the final healing we needed. Sometimes, I think God has bestowed Indians with the sole mission of ‘living to eat’ and then ‘living to talk about it’. Well, needless to say that we did both! To be surrounded by so much natural beauty was more than just therapeutic and when the six days came to a close, we headed back happy in the mind, body and soul, or as the Goans call it, with suitable amount of ‘susegad’.

NLP Life and Performance Coach, NLP Trainer. A two-time author, of the books -‘ Kanta Bai Pvt Ltd’ and ‘Me and My Middle Age’, Payal is also deeply involved with advocating a minimal waste & minimal plastic lifestyle. Running, reading, baking and painting are some of her other passions.