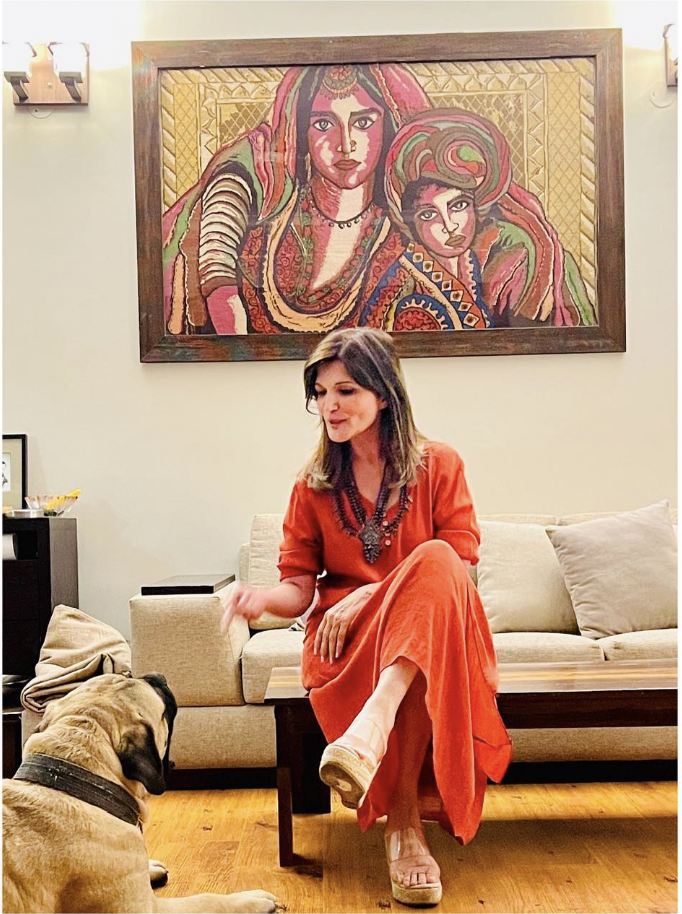 Turning sixty has been more eventful than I expected. My friends have been consoling me and wishing me the very best for my so-called ‘Hexa phase,’ as if I haven’t entered the sixties but been ‘afflicted’ by them. It isn’t like I was binging for decades and wound up with this unceremonious condition as a punishment. As a matter of fact, I feel fine, except for feeling just a bit wobbly on my feet from walking around holding so much of the past inside me!  But mostly, I’m fine.

When a friend half jokingly told me, it’s sexty, not ‘sixty’, I was not amused, and I’ll tell you why. I find the word sexy a tad cringeworthy, and years ago replaced sexy with ‘sesky’ in my vocabulary. The world equates the word sexy with physical attributes, and my seskyness, meanwhile, has gleefully abandoned my body and moved to more fertile pastures – my brain – my attitude – my spirit. Fact of the matter is, turning sixty, I feel smarter mentally, stronger emotionally and brighter intellectually than I did in my reckless twenties, cashless thirties, relentless forties, and careless fifties.

My body is fitter than before, and I feel as energetic and agile. If health is wealth, I feel like a million bucks!  I’ve even made peace with the odd wrinkle(s) here, the eventual bulge there. Being sixty doesn’t scare me one bit. Not getting to be sixty, perhaps, would.

What does concern me is people’s expectations (or rather the lack of them) about turning sixty. Also, their moth-eaten ‘should & shouldn’t list’ for my tribe. Listen to this – Sixty-year-olds shouldn’t: do fitted clothes; run up the stairs; wear pencil heels; climb trees; dance in the rain; and certainly shouldn’t post stories on Facebook and reels on Instagram.

And then come the shoulds’: Sixty-year-olds should feel over the hill or at least over their prime. Or maybe just ‘Over’! After all, there’s a reason why you’re called a senior citizen once you’re sixty. Don’t mess with that reason (so we’re told).

It’s a fact that our ageing patterns are very different from our parents, and we’ve succeeded in snatching a decade (or two) of biological youth from the clutches of ageing. Conventional wisdom says on turning sixty, you should feel low on energy, high on the pill, under the weather and over the hill. So here I am, on top of the world and over the moon, with my two cents for free (you can thank me later).

Conventional wisdom says abstinence is easy. Temperance is hard.
I say BS.
Abstinence is ill-advised. Temperance is the way to go. At 18, I weighed two kg more than I weigh today. And some roadside Romeos unchivalrously called me Humpty Dumpty. Since that day, I’ve been on a diet. A perpetual, sempiternal diet. It’s the one diet that’s always kept me fit. And it can effortlessly fit into anyone’s routine.
My diet is called, not Atkins, not Keto, not intermittent. It’s called Common Sense. I never skip meals or avoid sweets. Just tweak the quantity of what I eat. Sandwich tinier portions of carbs and sweets in bigger portions of greens and white meats. The result? No deprivation, no cravings, no binge eating. And life remains sorted.

Conventional wisdom says slow down. You’re a senior citizen now.
I say BS.
Don’t just sit there. Move, move, move. You’re only as old as you feel. If you’re 60 but feel 20, you look 40. If you’re 60 and feel 60, you look 80. If you’re 60 but feel 80, you were cremated before cows became more important than humans. So think young. Age joyfully. Be a joyspotter. Seek out delight in small things. Play with pets. Chat with children. Flirt with your companion. Jog in the park. Tend to your plants. Write a poem. Embroider a tapestry. Sing a song. Play the piano. Solve a puzzle. Watch a comedy show. If nothing else, bust the bubbles off a bubble sheet (believe me, it’s a great stress buster).

Conventional wisdom says going for anti-ageing treatments is an exercise in vanity.
I say BS.
If technology today can help reduce signs of ageing, why shouldn’t I not to make use of its advantages. If we can proudly show off our gym routines and our detox visits, why this hush-hush around skin rejuvenation, botox, or fillers? Own up your anti-ageing efforts. Try any arrow in the quiver of rejuvenation that works for you or floats your boat.

It’s funny how we always want more of everything in life. Wealth. Health. Happiness. But fewer candles on our birthday cake. More money is good. More happiness is good. More passion is good. So why should more age that comes with more intellectual growth be bad? As we get older, we need to realign our goalpost. From aimlessly clinging to your youth align towards nourishing your joy and keeping that inner child alive. Remember people, friends, family, colleagues and art, colour and plants can enrich any life. They can also re-feather an empty nest into a nest of possibilities, a nest of creativity and delight.

Never have I had an imagination more passionate and fantastical, nor a temperament that feels more ready to achieve the impossible. I wish the same for you dear reader. Welcome your sixty with the same enthusiasm and I promise it will one of your best decades.

Puja is a globally acclaimed tapestry artist, ad professional, creative writer, blogger, award-winning poet, and author (Mood Swings). She has experimented with several mediums for creative expression.
In 2015, Puja Bhakoo decided to use her passion for embroidery to fund her mission for charity. She then founded TAPESTRY-FOR-CHARITY — an initiative that utilizes proceeds from selling her tapestries to educate and rehabilitate underprivileged children. Today Puja Bhakoo’s environmentally sustainable tapestries enjoy a global clientele and are showcased at leading online art galleries and some of India’s premium home furnishing stores. She also holds solo exhibitions of her artworks from time to time.

Read Puja Bhakoo’s interview with us