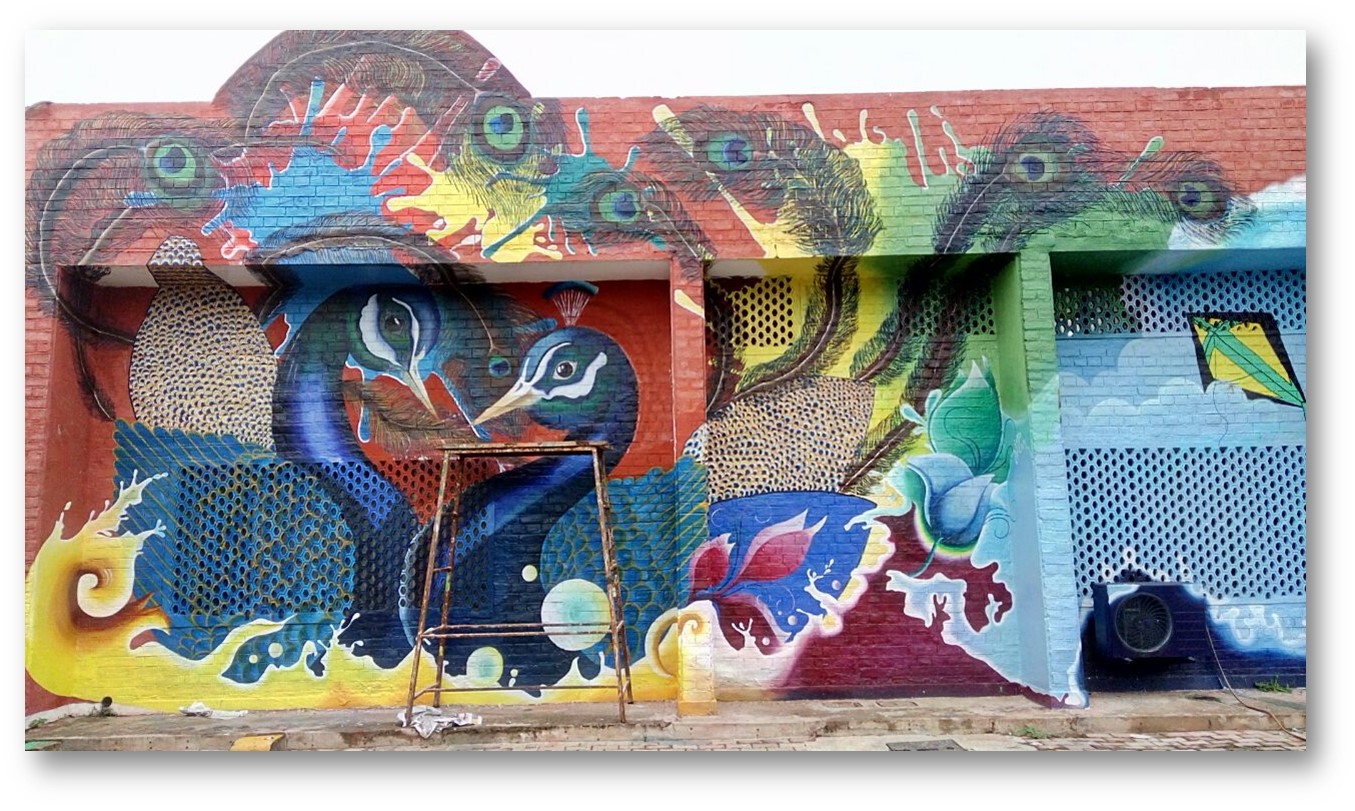 “As an artist, I achieved dual satisfaction by spreading the wings of inspiration and optimism among the prisoners – and to an extent put art – colours and creativity – on the map of an untrodden territory,” introduces Noida-based artist ‘nishu’ Natasha Chadha Bhambri. Under her Art Connect and the India Vision Foundation initiative, she has put her stamp of transformation in seven prisons across Delhi, Haryana, and Uttar Pradesh.

“My niece, Tarunima Bajpai, was then interning at Navjoti, and introduced me to Dr. Bedi. Seeing my art Dr. Bedi proposed I conduct an art workshop at the Bhondsi District Prison, Gurugram. I was then an established, progressive, contemporary visual artist, doing my bit for society. With her offer, I foresaw a higher purpose awaiting me. I was swept along by her contagious enthusiasm and passion. There was no turning back from there”, she recalls.

The same year, Bhondsi became Art Connect’s pilot project in Artistic Prison Reform. The initial four years involved narrowing over 40 potential artists from among the inmates down to a core group of eight for their aptitude and artistic skills. While concentrating on art and sculpture, Superintendent of Police Harinder Singh, District Prison Gurugram, suggested and supported revamping the entire 5000 sq. ft. four-sided exterior façade. Within four months the concept and designs were ready on paper. The unanimous thematic choice was National Integration incorporating Indian icons.

“Art Connect’s team – Aman, Ravi, Manish, Babulal, Anand, Hari Singh, Subhash, and Parveen – had already demonstrated their specialisation with respective mediums, including Maati Bandhu with the local sandy ‘mitti’ and Malba Bandhu comprising of discarded rubble, stones, telephone wire, etc. These installations have given ‘faces’ to trees and formed murals and textured walls. The entire interior of Bhondsi had permanently been reinforced as an evolving art and sculpture gallery. I was confident our next challenge of transforming the prison’s exterior would be a success too,” reconfirms the 45-year old artist.

For this project, ‘nishu’ spent four-five hours daily commuting from Noida to Gurgaon and back home. “Preparations started by designing, graph up, setting the base proportions and supervising my enthused team. They worked relentlessly during the 47 degrees summer temperatures, at times perched 15ft high on ladders. Their commitment overwhelmed and inspired me to keep innovating new techniques. I kept raising the bar and they kept stretching upwards to reach it! This became a sort of spiritual journey for me, aided by Monica Dhawan, Director, IVF. The art on the façade soon attracted eyeballs. People stopped and watched the prisoners painting, and in turn, gave the artists appreciation and some recognition,” she avers.

This initial collaborative attempt became life-changing for ‘nishu’. “Some moments are going to last with me forever…. One day, upon reaching the prison, my team asked me to go to the storeroom with them. Standing there was a work-in-progress, almost a six feet tall dinosaur. “Ma’am, you love to experiment. We thought we’d surprise you with our creation. But we got stuck with the proportions so need your guidance.” Their initiative touched me, as did their continued faith in me. Coincidentally, the sugarcane juice I had got, led to sharing a refreshing moment on another searing hot day!”

As the next project came up, various corporate CSR stepped in to conduct training programs and sponsoring the artistic transformations. The Art Connect-IVF-Sony Pictures Network combination resulted in creating dedicated spaces resonating with music in Kasna in Greater Noida and Dasna District Prisons in Ghaziabad, UP, and in Haryana’s District Prison in Ambala and Sunariya in Rohtak. In all, thematic Dhun music rooms were designed with Maati musical instruments and notes on walls and pillars.

Beyond Art Connect, ‘nishu’ runs her own Nishwet Creative House with her soul sister Shweta Bajpai. They participate in numerous art shows pan-India and take on private commissions – residential, commercial, corporate, CSR projects – or give artistic support to social awareness Government campaigns like Swachh Bharat Abhiyan association with Noida Authority and HCL. ‘nishu’ was recently invited to put up a larger-than-life art Installation at KGAF2020 (Kala Ghoda Arts Festival) in Mumbai, in appreciation of her artistic spirit.

‘nishu’s affair with art started as a child in Bikaner, copying cartoons and comics from newspapers. Sighting talent in his daughter, her Engineer father, Shri T K Chadha got her art supplies, and her mother Kiran Chadha, and brother Aashish Chadha became her best critics and driving force. A self-driven, self-taught art enthusiast, she learned 24 styles of paintings and has been exhibiting since college.

As she signs off, ‘nishu’ goes back to her passion – the artists behind bars. “These boys continue working on various projects and earn money by selling their art, including at the annual Surajkund Fair. An initial commission for them was a 12ft. x12ft. Maati sculpture of the Haryana logo for the State’s 50th Swarna Utsav year in 2016. The boys have also taken on training programs to mentor their fellow inmates in art and sculpture. As their terms finish, each artist is certified by IVF and Art Connect to enable their reintegration back into society, giving them the opportunities and trust they deserve. Many of those joining mainstream society are still in touch with me. I am blessed I still can help strengthen this reform program which will continue to give many present and future inmates a sense of hope and positivity – and bring moments of colourful joy into their lives.”

“I aspire to continue making changes where society needs it. Alongside my commercial art, I seek opportunities for my creative rainbow to help colour others’ world – and simultaneously, mine. My colours and me – that is the entirety of the moment. Art is my Paradise,” concludes ‘nishu’ whose encouragement comes from her husband Vikas Bhambri and sons Jai and Lakshya.

56 thoughts on “Art Behind Bars”