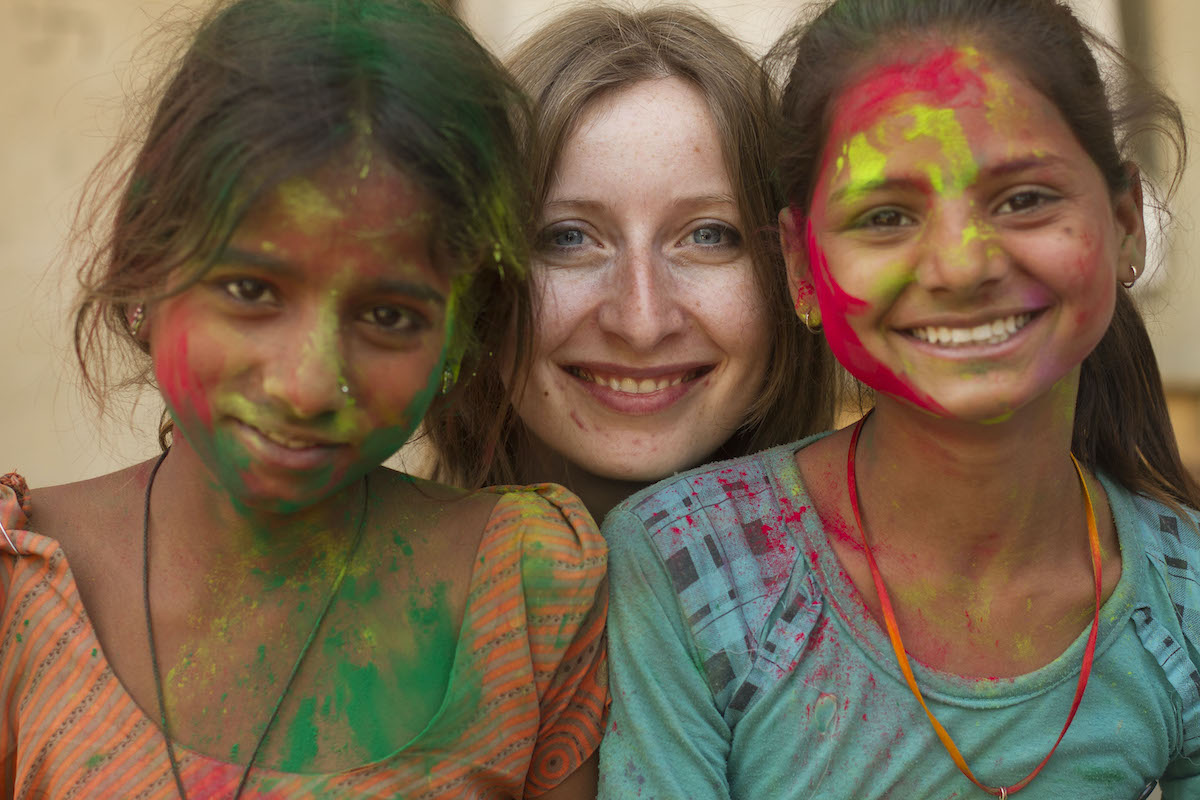 When Ewelina Janus, the Polish Founder of Aravindam India, was barely 24 and just out of University in Aachen, Germany, she landed at Delhi’s International Airport in May 2008. When the AIESEC management internship offer to India came through, her initial reaction was, ‘What? Where? Why?’. Apart from Yoga, everything about India, to her then, was inexplicable. Family and friends were aghast at her option. The fact that she finally returned home to Poland only after a decade – and is still yearning to return to her second home – is testimony about her experience of enigmatic India.

In her initial years, while based in New Delhi, Ewelina travelled across northern India over weekends. The more she saw, the more she was enamoured with the philosophy, diversity, colours, and cultures of this magical nation.

“My turning point came when I met Dr. Lokesh Abrol, a reputed doctor, traveller, photographer, writer, and social entrepreneur. He became my best friend and inspiration. I started work with underprivileged children. Together, we founded Aravindam India while continuing my mentoring and guiding startups across top campuses in the country as the National Director of The Hult Prize in India. Giving up my corporate career in Europe was not an easy decision. However, India had whetted my appetite for more. Working with underprivileged people, the students poised for social enterprise, the impact investors and social leaders had given me a new purpose,” Ewelina discloses.

“Lokesh was building the Kamdhenudham Gaushala (cowshed) in Gurugram for stray and sick cows. While assisting him, I found my opportunity in the slum where the Gawala’s (Gaushala worker’s) children would come to play in the Gaushala gardens. Surbhi Khanna, a young Indian doctor, helped me start the work with the first group under a thorny kikar (gum arabica) tree in April 2012. We started by providing homework support and non-formal education. It soon grew into an exciting stream of enthusiastic children – and the Aravindam Foundation was born,” the Founder recalls.

During the past eight years, the Foundation, which initially started with support from the local people and volunteers from the expatriate community, has grown exponentially. The Kamdhenudham was declared a model gaushala by the Animal Welfare Board, Government of India. Today it has a veterinary care centre and houses 2600 stray, and injured cows and bulls gathered from the streets of Gurugram.

“Upon completion of the gaushala, we refurbished and furnished the temporary construction worker’s quarters and converted them into classrooms. It was such fun to paint the rooms ourselves. There was never enough money, but there were always enough willing hands. It became a multinational effort during the hot, sweltering summer days of June and July. Eager volunteers were from India, Kenya, UK, Poland, the USA, Vietnam, and Japan. Soon we had enough colourful rooms and curious children to fill the place with laughter and smiles,” Ewelina reminisces.

Aravindam then gathered local philanthropists to build a temple complex to serve as the centre for Heritage learning. Today it has some of the top trainers teaching children the arts of Dance (Kathak and Bharatnatyam), Drums (Maratha and Western), Indian Percussion (Tabla and Tribal), Singing (Hindustani and Carnatic), Languages (Sanskrit and English), Painting (Madhubani and Warli) and Paper Crafts (Indian and Japanese). Apart from the spiritually uplifting space, the temple has also become a source of much-needed support to meet part of the Gurukul expenses.

“The Indian Heritage Learning has been added as one of our core values in the Gurukul Kalpataru Aravindam (Educational wing). Reflecting this focus, we now call ourselves Aravindam India”, explains Lokesh.

The Aravindam India initiated a learning protocol where each child gets academic support, along with at least one national heritage skill, and one entrepreneurial skill. It was a proud moment on the 29th of July 2020 when the Government of India adopted the new national education policy whose vision and mission in this respect reads like a copy from Aravindam India’s existing vision and mission. All school children who will finally appear in national and international examinations, will learn at least one skill from Indian heritage and get hands-on experience of entrepreneurship with local craftsmen.

The covid lockdown brought a novel opportunity of developing online learning protocols for the children. In addition, while most migrant labourers trudged thousands of kilometres to return home, the Foundation gathered resources from good Samaritans to support, feed, and care for over 150 migrant workers’ families, so none of the Gurukul children or their families had to bear the hardship that befell many others and return to their villages, “says Lokesh gratefully.

“It is heartening to find the children thinking and searching the internet for ‘how to become a judge, a lawyer, an aerospace engineer, a musician, an army officer etc.’ In the absence of opportunity, most of these aspirations would not see the light of day, for want of fertile ground to sprout. That is already half a battle won,” says Ewelina of the computer literacy being provided.

After school hours, Aravindam India’s premises are converted into skill training classes for about 40 women. The prime programs for the women’s empowerment wing are the NIIT certified computer courses, and Singer certified sewing courses. Most of these women, previously restricted behind veils, have seemingly won another freedom silently. They have gathered resources and funds through their own initiative to celebrate India’s Independence Day. The program is an impressive grand show of dance, drama, and music to which the entire neighbouring village is invited. A parallel initiative has been set up in Pachgaon, near Manesar, where an equal number of women are receiving similar training.

Aravindam’s work inspired a team from IIT Kharagpur, led by Abhimanyu Abrol, co-founder of Aravindam, to propose the education model at the Clinton Global Initiative supported Hult prize event in San Francisco. The Hult Prize Foundation invited Aravindam to be the official partner of the world’s most significant award for Social Entrepreneurship. It is considered the ‘Nobel Prize’ for students and named one of the five top ideas changing the world by President Clinton in Time Magazine.

Initially, the Polish lady had reservations about her comprehension of Hindi. “But I soon realised people have a language that transcends all barriers. I have gathered words and sentences that help to navigate most situations. I enjoy Sanskrit and Indian classical music. I also enjoy short breaks to explore India. My family back in Poland had a hard time trying to figure out what keeps pulling me back to India, till they visited themselves and fell in love with the country and its people,” she concludes.

Even though work has taken Ewelina back to Europe, her heart is with the kids and the families that have become her own in India. She hopes to be back again, no matter how and when.

Meanwhile, Aravindam Foundation is in the capable hands of Dr. Lokesh Abrol, who signs off by summing up his involvement simply, “This is the most significant part of my life now.”

2 thoughts on “Gaining ‘Gyan’ in a Gurukul”