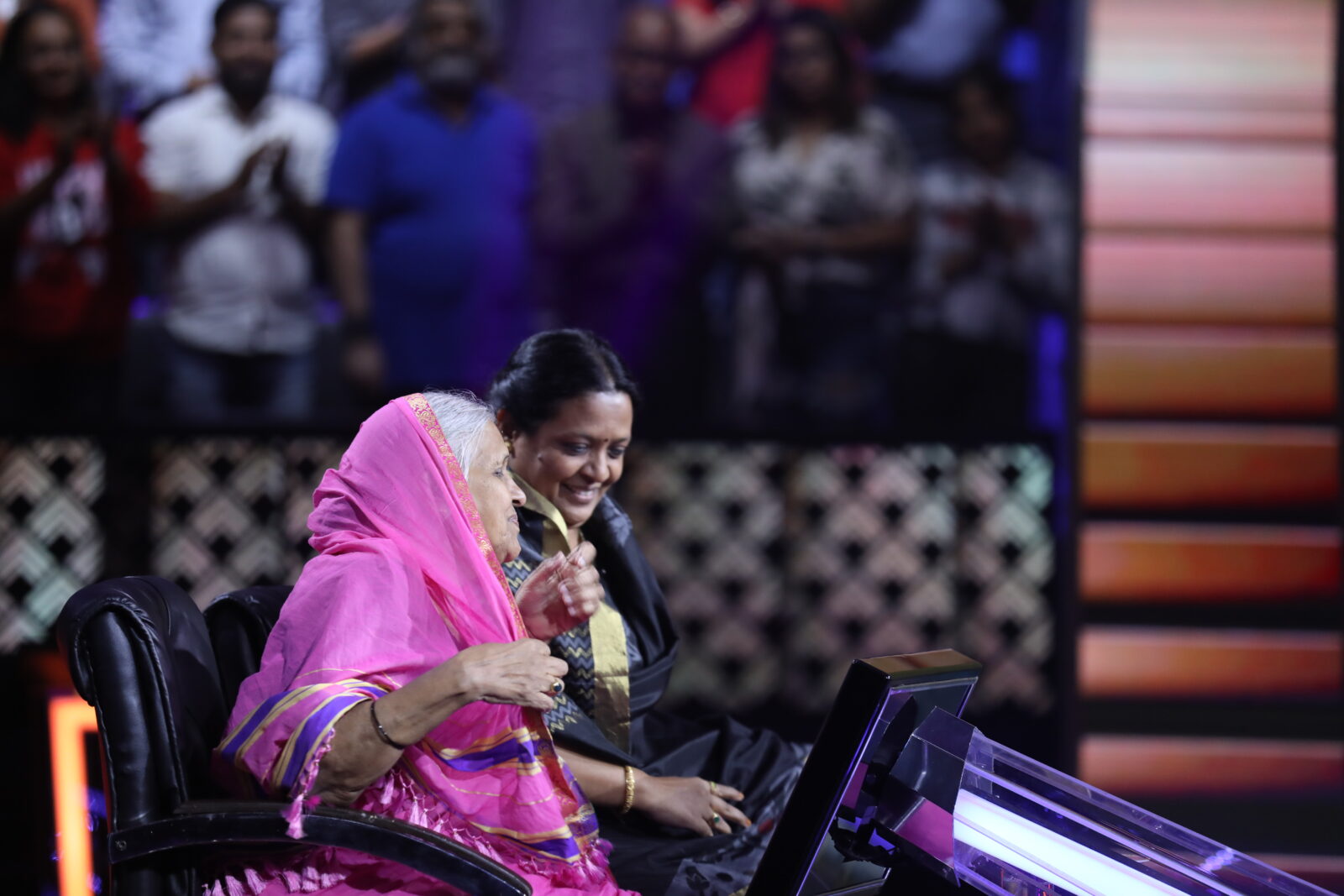 Honours have come a plenty to Pune-based social activist Sindhutai Sapkal who helms The Mother Global Foundation. Two recent highpoints were, when in 2018 the Hon’ble President of India, Mr. Ram Nath Kovind, presented her with the Nari Shakti Puraskar, 2017.

Then on 23rd August 2019, all of Kaun Banega Crorepati’s almost 38 million viewers saw the 71-year old lady, lovingly known as Maai, being welcomed on the popular show by the legendary Amitabh Bachchan bowing and touching her feet. The gesture of respect bowled everyone over!

There is something very ‘maternal’ about Sindhutai – dressed in a cotton sari, worn Maharashtrian style, a large ‘bindi’ on her forehead, her silver-grey hair covered with her ‘pallu’. She is ‘Maai’ to more than 1500 orphans. Over the years many have moved out to live independently. Her family presently includes 282 sons-in-law and 48 daughters-in-law. Each wedding, birth, graduation or festive celebration is conducted in Maai’s presence. Each child, unless having his/her own surname, takes on the ‘Sindhutai Sapkal’ surname, along with his or her name.

“I have been with Maai since she found me at Pune railway station when I was 1-1/2 months old.  I now have almost 1500 brothers and sisters. Maai’s schedule is booked three months in advance. She has been invited to London, Hong Kong, Malaysia, Dubai, USA and Kuwait among other places,” says Vinay, who holds a BA LLB degree.

Quite early in life, Maai discovered: “I had good communication skills and influenced people with my thoughts. Hunger made me sing and speak out, and became my source of income to take care of my children,” she communicates in Marathi – and a smattering of Hindi.

Flashes of Sindhutai’s life come to the fore as she talks about her journey – and the transformation to the ‘power’ that she is today.

Born on 14th November 1948 to a cattle-grazing family in Pimpri, Maharashtra, Sindhutai was the oldest, an unwanted girl, among one brother and three sisters. She was nicknamed ‘Chindhi’ (literally, a rag). Her father Abhimanji Sathe saw potential in his daughter and wanted to educate her, much against her mother, Vaylibai’s wishes. She went to school under the pretext of cattle grazing. Not being able to afford a slate, learned to write on the large leaves of the Bharadi Tree. Her schooling was aborted when in her 4th class she was forced into a child marriage.

“I was told there are only two processions in a woman’s life – once when she gets married, and the other when she dies. Imagine my state of mind when they took me, then 10, in a procession to my husband, Shrihari Sapkal, a 30-year old cowherd’s village home in Wardha,” she recalls.

Sindhu bore him three sons by the time she was19 years. In 1974, Sindhutai’s strong personality showed its first rebellious signs when, though pregnant with her fourth child, she agitated against a landlord for robbing the villagers of their dried cow dung which they used as fuel and sold it in collusion with the forest department. The District Collector noticed the villagers’ plight and issued an order against the local bully. The landlord avenged the insult by spreading rumours of infidelity about Sindhu. Soon her neighbours shunned her, and forced her husband, Shrihari, to abandon her. He thrashed his almost full-term pregnant wife and later, all alone, she gave birth to a girl in the cowshed, cutting her umbilical cord with a stone. The next day she took her newborn to her maternal village but was also shunned by her family.

Sindhutai and her daughter Mamata, now 49, were homeless and without food. She took shelter in a crematorium. A dead body was being cremated, and after the last rites, she found some flour left behind for the departed soul. She kneaded it and cooked a ‘bhakari’ (roti) on the funeral pyre and fed herself and Mamata.

According to Sindhutai’s biography, seeing Rani Laxmibai’s statue in Pune, willed her to survive.

Blessed with a melodious voice, she, along with Mamata, spent the next few years moving from place to place, singing and begging. Simultaneously, she came across numerous homeless, abandoned children. She sheltered them from exploitation by sleazy characters and fed them with her earnings, showering them with affection. Calling her ‘Maai’, they followed her.

As her brood of children grew, Sindhutai decided to leave Mamata at the Shrimant Dagaduseth Halwai Trust in Pune, which also educated abandoned children. Her reason being to eliminate partiality towards her daughter over her adopted children.

While working with Adivasis in neighbouring villages, Sindhutai noticed a total lack of education. In 1992 she set up Savitribai Phule orphanage for Adivasi girls in Chikhaldara.
The well-equipped orphanage’s houses children from birth to 20 years. On completion of their studies, they join the workforce, moving out to live independently. Some have become lawyers, lecturers, doctors, CAs, MBAs, and nurses.

Among them is Sham Randive who completed his PhD on Sindhutai’s life. Homeless children are admitted as per the Children’s’ Act 2006, with the permission of the Child Welfare Committee. Divorcee Smita Pansare, 43, has been Superintendent at Mamata Bal Sadan for 18 years and is a Masters in Social Work. Here widows, divorcees, abandoned and abused women are also trained to work in Sindhutai’s various orphanages.

Deepak, her very first adopted son, heads Mamata Bal Sadan, Pune for boys. Those who aren’t inclined towards studies, yet aspire to work, Maai has set up the Krushna-Maai Washing Centre in Pune for cars and two-wheelers.

“Maai’s heart-rendering oratory and recitals of poem and ghazals prove her inner pain. She never blamed her husband. Instead was grateful that due to the treatment he meted out to her, she became a strong, independent, caring woman,” adds Vinay.

Almost 30 years after 80-year old Shrihari Sapkal threw his young, pregnant wife out of his home, in 2004 he came to Sindhutai seeking forgiveness for his past actions. She accepted him as her “oldest child”, as she does any miscreant one – stating she was only a ‘mother’ now. Srihari lived at the Chikhaldara Ashram till he passed away 12 years later. Her three biological sons continue to look after their late father’s farms.

Upon his death, she said, “Shrihari, my most dangerous and difficult child, has left us. His death concludes the second chapter of my life.”
“My Final Battle is to establish a multi-specialty hospital and nursing college for the healthcare of Adivasi tribals at Chikhaldara,” Maai concludes.