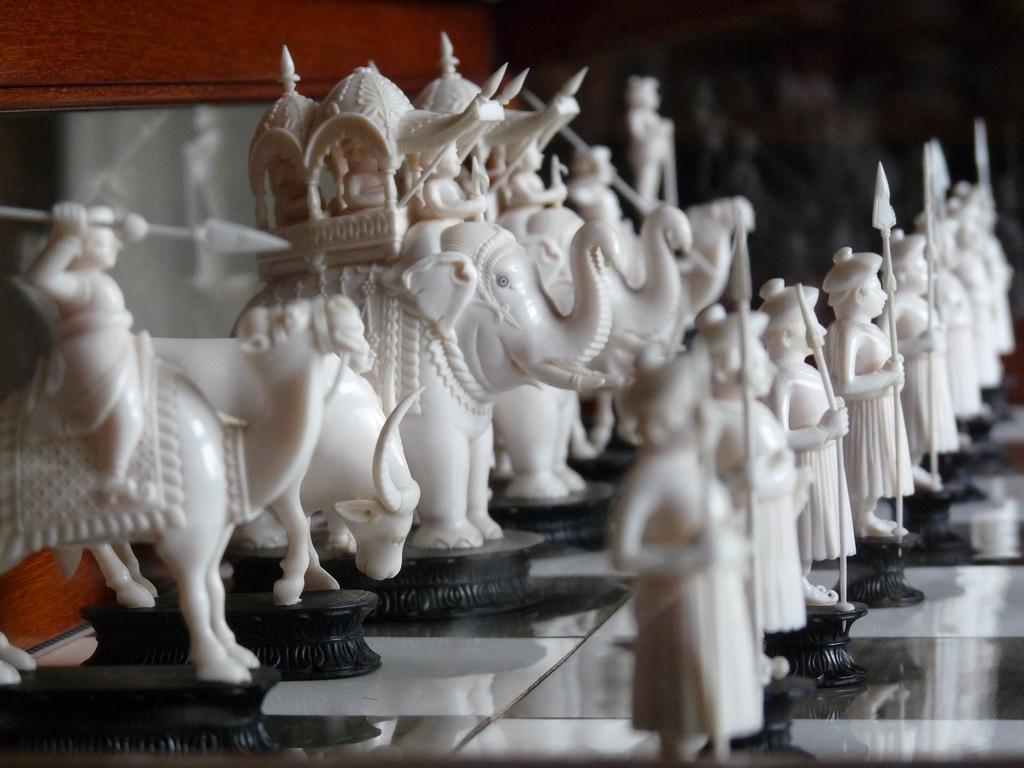 Memories of Partition of Ivory Toys and Poisoned Sweet Limes go back to the monsoon of 1947, when it rained more blood and tears than rain. These are poignant recollections by (Late) Colonel Swarup Lal Kapur, Retd., then a little boy, of his memories of the bustling home he never ever forgot, of the little box of ivory toys – the only token of a secure childhood, and the poisoned sweet limes, that often came back to haunt him on pensive evenings. His daughter Anjum Kapur, plays them back for us.

Kadakni, the village of my father’s ancestral family home for generations, in the land that now lies across the LoC, was a prosperous, fertile part of District Montgomery or ‘Mintgummery’, as my imperious, Punjabi speaking Daadi (paternal grandmother) rolled off her richly accented tongue. Named after Sir Robert Montgomery, then Lieutenant Governor of Punjab, it is now a bustling town renamed Sahiwal and lies between Lahore and Multan.

They were one of the most progressive and prosperous families in the region. My grandfather was a tall, handsome, hard working and enterprising Punjabi landowner, Lala Amar Nath Kapur, who, legend has it, was known for his enterprise and large heartedness and owned many hundreds of kilas (acres) of land spread over many surrounding villages. He was admired and feared for his uprightness, his sharp sense of justice and an inherent sense of authority, which came naturally to successful, self made men, even in those times. Trusted by the local governing authorities, he had the honorary designation of Officer on Special Police Duty, to help solve local disputes.

A sprawling haveli (mansion), was home for the large, bustling joint family – the sons, daughters-in-law and grandchildren of Lala Barqat Rai Kapur, the abundant ones, which they were, literally and figuratively. My father, then about seven or eight years old, remembers being escorted to school in a horse drawn tonga, one of the few in the village, along with his siblings and cousins; eleven young children of ages one to fifteen, growing up together in a bustling, affluent home. The ladies of the house had special, covered buggies to take them around, which were pulled by two horses. The large kitchen churned out delicious, hot food for more than twenty people at each meal, including the household helpers. There was shikaar (game) to be cooked and fresh produce from the land to be savoured. The family retainer, Saudagar, would ply the children with tall, peetal (brass) glasses of fresh, frothy milk from a barn full of cows, in the mornings before school. Life was good and happy and well, abundant.

My grandfather unfortunately passed away in the winter of 1946, due to a sudden, acute illness. My grandmother, a protected and cosseted wife and still quite young, was suddenly bereft and rendered alone to bring up five young children, the youngest still an infant, fortuitously with the help of her husband’s younger brother and his family. Life became tougher but was still serene, given the catastrophe of the Partition that lay in store for them just a few months away.

There had been murmurings of a Partition but nobody quite took it seriously. Surely they couldn’t be thrown out of their own homes and the lands of their ancestors, and at such short notice, if at all? The departure came suddenly when news of slaughter and loot spread like wildfire. They loaded what they could, mostly utensils, bed linen and jewellery – the key domestic assets in most Punjabi homes, in their tongas and left, still disbelieving and shocked. The security of the tongas and their minimal load of worldly assets was short-lived; they were snatched from them within a few hours of heading out, by the newly minted, hostile citizens of a newly minted nation. My father remembers clutching on to a small box of ivory toys, the only memory of a short lived, halcyon childhood.

They had no option but to join a kaafila (caravan) on foot, with thousands of others like them – little children, stunned adults and the weak and stooping old, suddenly uprooted, homeless and shell shocked. They were headed towards the nearest post of the arbitrary ‘Radcliffe Line’, which decided the bloody fate of fifteen million people rendered homeless in the Partition of 1947; it rained more blood and tears than rain that year.

The nearest post of the new country they were now stunned citizens of, was in Fazilka, about a 100 km from where they started walking. My father remembered being hungry a lot, as they walked that seemingly endless distance, with frequent alarms of hostile and murderous attacks en route. The small box of ivory toys was found missing after one such restless night of fear and precarious uncertainty; the little seven-year-old boy in him still lamented their loss.

Another poignant Partition memory is that of a fruit orchard they stopped to rest at, with luscious sweet limes hanging low from the branches of glistening citrus trees, tempting the ravenous young children to reach out for them. He recalls being screamed at by the adults, forbidding him and other children from touching the fruit, after it was discovered that they were injected with poison and people were dying from consuming the juicy sweet limes (mosambis). I don’t think the shock and horror of that hungry, haunted night, of being surrounded by an orchard full of poisoned fruit and dying folk, ever left him entirely.

Finally, they reached their destination, but not before they crossed a similar kaafila of hungry, hollow faces with vacant eyes, headed in the other direction, towards Qasoor. That kaafila had been visibly attacked earlier, this time by the locals on this side; the blood still hadn’t dried in their eyes and on their clothes.

(This independence has been catastrophic for both sides

It took many, many years after Partition of shifting base from relative to sometimes callous relative, of being granted uncultivable land in exchange of the lush, flourishing fields that they had left behind, of the once cosseted young siblings weeding out large expanses of thorny bushes from dry fields with their tiny, bare hands, before they began to start feeling they had a home, even if starkly different from the one they had left behind, though not quite.

My father (Late) Colonel Swarup Lal Kapur, Retd. went on to join the Indian Army and along with his family, rebuilt his life, like millions of others in the Partition, with sheer hard work and the resilience of the human spirit. The void of abandoning a thriving home however, never quite got filled. The little box of ivory toys, the only token of a secure childhood, and the poisoned sweet limes, just out of reach of a hungry child, however, came back to haunt him on many a pensive evening.

Anjum Kapur is a devout fauji brat, zealous single parent, keen trend-spotter, adventurer, writer and poet in progress. A management postgraduate, she has worked with the British Council, McCann Erickson, Grey Worldwide, FCB Ulka, The Times of India, Ranbaxy and is currently on the cusp of an empty nesting crisis.

Being Indian
A Refund Letter Sent Out Too Soon!
The Goa Unlock

6 thoughts on “Memories Of Partition”