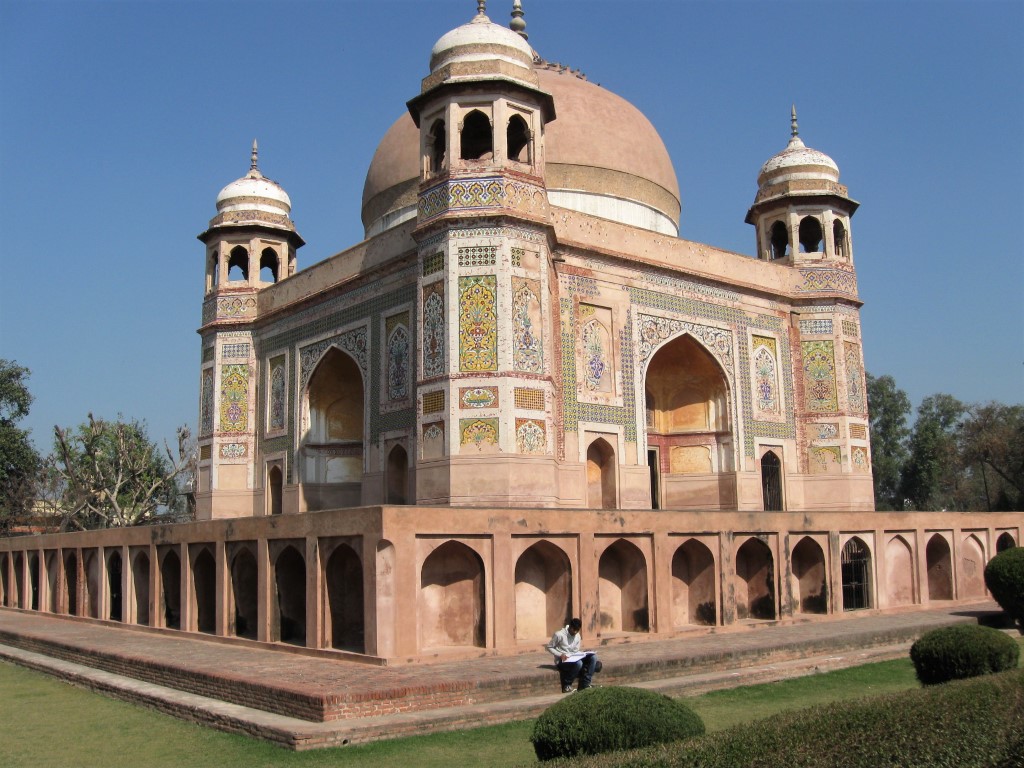 The Mughals left a large and visible footprint in Punjab given its vantage location on their high road from Agra to Kabul, later Delhi to Lahore. Most notable of these structures are from the reigns of Akbar and Jahangir with the latter contributing towards construction of bridges, digging of wells & tanks, and the repair of bridges. Later Shah Jahan would construct and embellish royal structures, serais and roads. Baolis (stepped wells) and traditional wells can still be spotted in close proximity to resting inns and settlements; they once served both man and animal. This harmonious melding of Indian and Persian influences has bequeathed the land with many striking examples of architectural heritage that includes tombs and bridges across perennial streams.

Takhat -i-Akbari, Kalanaur
Little did a callow thirteen year old–habitual of romping about in the hills, racing camels and horses, hunting with hounds, flying pigeons–anticipate his father’s passing in an accidental fall down a flight of stairs. Much less that he would be unexpectedly catapulted into the adult world of intrigue and politicking with him being the cynosure of many an envious eye. He was none other than the Mughal Dynasty’s most celebrated administrator, Jalaluddin Mohammad Akbar, who was proclaimed Emperor following Humayun’s unforeseen death soon after having regained the throne of Delhi. That this news would reach Akbar while he camped on the banks of the Ravi in Punjab under the watchful eye of his Turkish guardian Bairam Khan has left the region a little richer in monumental wealth.
Fifteen km from the border town of Dera Baba Nanak en route to Gurdaspur is the moffusil township of Kalanaur. Amongst its very few claims to fame is the Takht-i-Akbari – the site of a royal coronation on 14th February, 1556. Given the nature of royal intrigues, and not wanting to expend time in travelling to Delhi, Bairam Khan commissioned the immediate construction of a temporary throne. A raised platform with a stone bench fronted by an embedded fountain, steps and cascades on all sides was quickly fashioned. And it was on this most unlikely of royal furniture that Akbar was bestowed the Tajposhi (coronation) of Hindustan. It is a reasonably well-tended site by the village panchayat and sits amidst luxuriant fields about two kilometres northeast of the SH25 that cuts through Kalanaur.

Tomb of Mohd Momin, Nakodar
Nakodar, approximately 25kms south of Jalandhar, hosts two very fine gems harking back to the seventeenth century: the tombs of court musician Mohammad Momin, a tanpura maestro, and his student Haji Jamal. Placed close to each other on plinths of similar height and enclosed within a beautifully tended garden. The former is speciously believed to be one of ‘Nine Gems’ that enthralled Akbar’s court with their metier. He was in fact a musician in the service of poet Abdul Rahim Khan-i-Khana, one of the Navrattans. The tomb of Mohammad Momin (also known as Ustad) was erected in 1612.

Haji Jamal Tomb, Nakodar
Facing it, in a reverse plan, is the tomb of Haji Jamal, constructed 45 years later, and much less adorned. Interestingly, this tomb has no visible grave within, unlike its neighbour which enshrines five of them. The monotony of its bare interior is broken by a fresco on the ceiling and Islamic inscriptions above the arches.

Serai Nur Mahal
Twelve kilometres south east of Nakodar is Nur Mahal, a small town that was once strategically placed on the much-used Imperial Road before its re-alignment by colonial powers. Presently, it is best known for the handsome Mughal serai built by one Zakariya Khan under instruction from Nur Jahan, wife of Emperor Jahangir. Sacked on a number of occasions, falling into effective ruin, it wasn’t till the end of the 19th century, some two hundred years later, that heritage-respecting British officers restored the serai’s grandeur. Even today, despite being hemmed in by a busy marketplace, its exquisite western gate lords imposingly over its surroundings.

Serai Amanat Khan
Yet another, built in 1640 AD, is the indigo and ochre tiled Sarai Amanat Khan (roughly 15kms from Attari village), its facade sporting impressive Islamic embellishments. This should come as no surprise for it was commissioned by none other than the calligrapher of the Taj Mahal. It bears his name, as does the encompassing village. This serai too houses a well and a mosque. The rooms that may have once existed long encroached upon by villagers who have lived in and around it since Partition. An attempt has been made to restore some of the original grandeur though little has been done to remove squatters. A short walk towards the eastern gate will bring you to the remains of his tomb.

Kos Minar – Enroute Serai Amanat Khan from Attari
The penultimate Mughal era footprint is just inside of the international border with Pakistan. Called Raja Taal, it is closely linked with Raja Todar Mal, another one of the nine gems in the court of Akbar. Unlike some of its peers which have found protection under state or central archaeological institutions, the tank built by Todar Mal is in a state of neglect; much like the exquisitely decorated mosque known as Badshahi Masjid. While a forlorn kos minar sitting not-so- prettily on the Radcliffe Line marks the end of the road for Mughal heritage in modern-day Punjab.

Author, travel writer, food critic, columnist, and an irrepressible itinerant, Puneetinder Kaur Sidhu writes on a wide variety of topics. She is a regular contributor and columnist on travel, food and literature, apart from having penned over a dozen travel guides for Lonely Planet, Her latest book, Guru Nanak’s Blessed Trail, encapsulates over 80 gurudwaras associated with the founder of Sikhism across Punjab. Sidhu has also authored a fun read ‘Adrift – A Junket Junkie in Europe’ about her travels around the continent; a driving guide called Experience Punjab on the Road; a comprehensive book on the Simhastha Kumbh; and Punjab – A Culinary Delight, a coffee table book about the food traditions of her home state. She blogs at Cutting Loose, and can be found sharing nostalgia @cuttinglooseinsta.